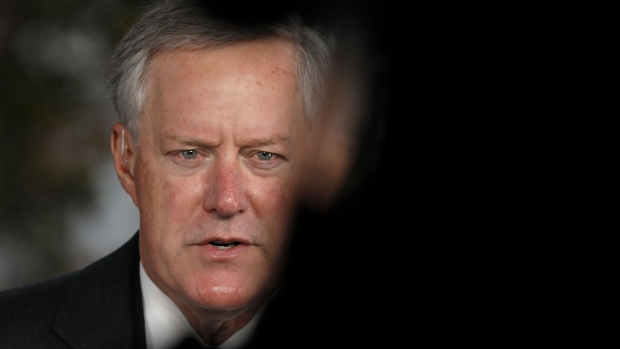 Mark Meadows, White House chief of staff, speaks during a television interview outside the White House in Washington, D.C., U.S., on Sunday, Oct. 25, 2020. Meadows defended the White House response to the coronavirus after infections of at least three staff and advisers to Vice President Mike Pence, but said the U.S. isn't going to "control" the pandemic. , Bloomberg

The former Republican representative did not appear before the panel for a scheduled closed-door deposition Wednesday morning, making him the latest Trump confidante to refuse to comply with the investigation.

“The Select Committee is left with no choice but to advance contempt proceedings and recommend that the body in which Mr. Meadows once served refer him for criminal prosecution,” Mississippi Democrat Bennie Thompson, the committee’s chairman, wrote in a letter Tuesday night to Meadows’ lawyer, George Terwilliger.

Roger Stone, another Trump ally, was scheduled for a Dec. 17 deposition before the panel, but he said in a text message that he will invoke his 5th Amendment right to not answer questions in what he called a “politically motivated jihad.”

Stone’s lawyer, Grant J. Smith said in a letter to the committee that its demand for documents “is overbroad, overreaching, and far too wide ranging to be deemed anything other than a fishing expedition.”

Regarding Meadows, Thompson said “there is no legitimate legal basis for Mr. Meadows to refuse to cooperate with the Select Committee and answer questions about the documents he produced, the personal devices and accounts he used, the events he wrote about in his newly released book, and, among other things, his other public statements.”

The committee gaveled in its scheduled 10 a.m. deposition and adjourned when it became apparent that Meadows would not appear.

The committee of seven Democrats and two Republicans are expected to soon announce a business meeting to vote on advancing a contempt of Congress charge against Meadows to the full House. If the House holds Meadows in contempt, the matter could be referred to the Justice Department for prosecution.

Neither Meadows nor his lawyer immediately responded to a request for comment.

Meadows’ cooperation with the panel has been in doubt since Trump lawyers made it known he wanted his former aides and allies to defy the panel’s subpoenas.

Meadows has turned over some records, including hundreds of emails, texts and other documents, and as recently as last week signaled through Terwilliger he would be willing to appear for an initial deposition this week.

Terwilliger has said his client’s cooperation would relate only to “non-privileged topics” and that they were discussing with the committee how to proceed.

Another Trump ally, Steve Bannon, has already been indicted by a federal grand jury on two charges after the House voted him in criminal contempt for refusing to cooperate with the Jan. 6 panel. Bannon’s trial is set to begin July 18.

Jeffrey Clark, a former Justice Department official and Trump adviser, faces potential House contempt action as the panel seeks to counter the former president’s efforts to thwart its inquiry into the Capitol attack that injured dozens of law enforcement officers and interrupted Congress’s certification of the 2020 Electoral College results.

The committee’s contempt action against Clark hinges on how cooperative he is in closed-door questioning rescheduled for Dec. 16.

The committee continues to seek information from telecommunications companies that have been asked to preserve phone and other records of people who might have information relevant to its investigation, a committee aide said.

In August, the committee had instructed numerous telecommunications companies to preserve records, and is moving forward with obtaining them, said the aide. These requests do not include the content of any communications or location information, but simply deal with the dates and times that communications took place, the aide emphasized.