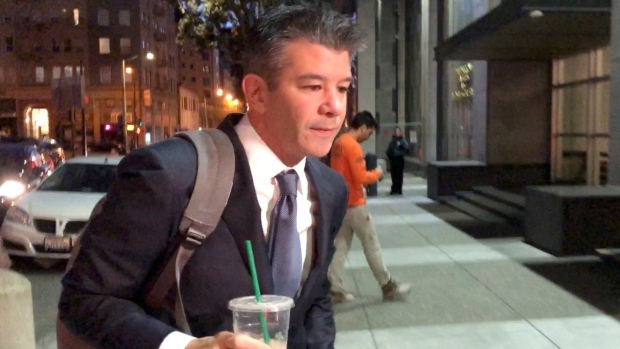 Just a few years ago, Uber Technologies Inc saw itself as the little brother to Alphabet Inc, but that cozy bond quickly dissolved into a turf war and ultimately a high-stakes legal battle, a jury heard on Wednesday.

Former Uber Chief Executive Travis Kalanick described how his own relationship with Alphabet Chief Executive Larry Page deteriorated as their companies competed in ride-hailing and autonomous car development, producing a tense rivalry that eventually led to a lawsuit and trial in San Francisco federal court.

Alphabet's self-driving car unit Waymo sued Uber, a year ago saying that former Waymo engineer Anthony Levandowski downloaded more than 14,000 confidential documents in 2015 before leaving to found a self-driving startup that Uber snapped up in 2016.

Waymo has estimated damages in the case at about $1.9 billion, which Uber rejects. Levandowski is not a defendant in the case.

Kalanick's testimony on Tuesday and Wednesday is a crucial part of the trial, which promises to influence one of the most important and potentially lucrative races in Silicon Valley - to create fleets of self-driving cars.

Kalanick's testimony showed the personal nature of the lawsuit, which is as much about big personalities at wealthy technology companies as it is about the technology itself. Uber was once a prized investment for Alphabet, whose venture capital arm made a $258 million bet on Uber in 2013.

In Uber's early days, its relationship with Google was "like a little brother to a big brother," Kalanick said under questioning in court, and Page and Alphabet executive David Drummond were like mentors to the less-seasoned Kalanick.

After Uber heard Alphabet was dabbling in ride-hailing services, Uber's business, Uber moved into self-driving cars, a project Alphabet had been working on since 2009. Uber hired away 40 experts from Carnegie Mellon University to set up a self-driving car lab in Pennsylvania, a move that upset Page.

"He sort of was a little angsty and said 'Why are you doing my thing?' and was just upset," Kalanick testified.

Uber's acquisition of Levandowski's startup, Otto, only added to the animosity, and days after the deal was announced, Drummond resigned his seat on Uber's board of directors. Recalling Page's raw feelings that surfaced with the Carnegie hires, Kalanick feared a lawsuit was coming.

Although famous for his hot-headed temperament, Kalanick kept his cool on Wednesday and offered short, subdued responses to Waymo's attorneys, whose questions focused on Kalanick's competitive nature.

Kalanick was ousted from Uber in June after a tumultuous period of scandals and investigations. The Otto acquisition and Uber's self-driving car development happened under Kalanick's direction.

Kalanick has said self-driving cars are existential to Uber, and was rankled that Uber was trailing Waymo. In court, Waymo attorney Charles Verhoeven showed Kalanick a text message in which Levandowski told Kalanick: "I just see this as a race and we need to win. Second place is first loser."

When asked if he agreed with that sentiment, Kalanick said: "Well, I first heard it from my high school football coach, but yes."

Waymo sought to portray Kalanick as so eager to improve Uber's autonomous car business that he quickly acquired Otto and hired Levandowski without properly assessing the risks. He was frustrated by the slow pace of Uber's self-driving program, which trailed Waymo, and thought Levandowski could turn it around, the 10-person jury heard on Tuesday.

Kalanick said Wednesday that he never read a due diligence report prepared by an outside firm that determined Levandowski did posses Google data.

But in a deposition last year, Benchmark venture capitalist Bill Gurley, an early Uber investor and former board member, said Kalanick told the board the diligence report was "clean." Kalanick denied having said that. Gurley also said Kalanick "crossed a line of violating fraud and fiduciary duty" with the Otto acquisition.

As part of the Otto deal, Uber agreed to indemnify Levandowski against any legal action, Kalanick said. He conceded that the legal battle makes hiring Levandowski "not as great as what we thought it was at the beginning."

Uber was not the only company interested in Levandowski - rival Lyft Inc also made an offer to buy Levandowski's self-driving startup, Lior Ron, Otto co-founder and an Uber executive, testified on Wednesday. Levandowski turned down the offer.

Kalanick was shown in court an email from another executive, which said the "X factor" of acquiring Levandowski's company was the "IP in their heads."

Kalanick said he did not remember the email but did not deny reading it. When questioned by Uber's lawyer, Kalanick said that "to no extent at all" did he hire Levandowski to get trade secrets and Levandowski never told him he would bring Waymo's secrets to Uber.

The trial is expected to continue through next week. The jury will have to decide whether the documents downloaded by Levandowski were indeed trade secrets and not common knowledge, and whether Uber improperly acquired them, used them and benefited from them.