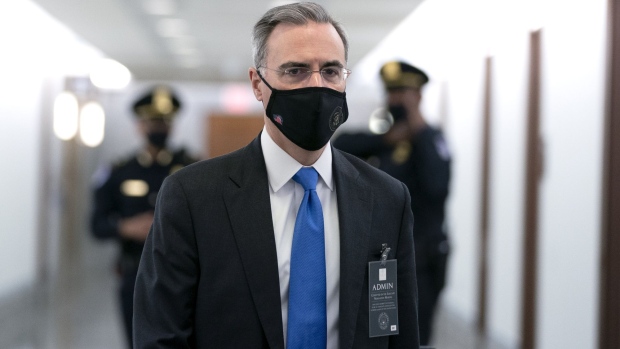 Pat Cipollone, White House counsel, wears a protective mask while arriving before a Senate Judiciary Committee confirmation hearing in Washington, D.C., U.S., on Wednesday, Oct. 14, 2020. Senate Democrats enter a second day of questioning Amy Coney Barrett having made few inroads in their fight to keep her off the Supreme Court and elicited few clues about how she would rule on key cases. , Bloomberg

(Bloomberg) -- Former White House Counsel Pat Cipollone can’t use a blanket claim of executive privilege to snub a subpoena to testify to the House committee investigating last year’s attack on the US Capitol, a panel member said.

“That’s not an absolute immunity,” Representative Zoe Lofgren, a California Democrat, said on NBC. “It falls when there is something more important, and that is true in this case.”

The Jan. 6 committee has subpoenaed Cipollone to appear Wednesday for closed-door questioning.

Committee members view him as a central figure in the dramatic moments before, during and after the storming of the Capitol by supporters of former President Donald Trump. Former White House staffer Cassidy Hutchinson cited what she said were legal concerns by Cipollone during her testimony last week.

Lofgren said on “Meet the Press” on Sunday that there are limits to what is covered under executive privilege doctrine, which allows a president and close advisers to withhold documents or testimony about conversations under some circumstances.

Last week, committee vice chair Liz Cheney, tweeted before the subpoena was issued that it’s time for Cipollone to testify. “Any concerns he has about the institutional interests of his prior office are outweighed by the need for his testimony,” she said.

In her testimony, Hutchinson said Cipollone urged her to make sure Trump wouldn’t go to the Capitol grounds on Jan. 6 with his supporters, some known to be armed, warning that, “We’re going to get charges of every crime imaginable if we make that movement.”

Cipollone has talked informally with the panel, Lofgren said. The committee wants to obtain his first-hand testimony in usable form, including about his warnings, also to Trump aides, that an effort to block Joe Biden’s 2020 election victory was “unlawful.”

“After Ms. Hutchinson’s testimony that was so informative, it’s very clear that we would like him to come in,” Lofgren said.

Lofgren also took a swipe at the Justice Department when asked about a New York Times report that federal prosecutors felt blindsided by not being given video or transcripts of Hutchinson’s closed-door testimony prior to her public hearing appearance last week.

Hutchinson previously sat for four closed-door interviews that were widely reported, and the department could have subpoenaed her, Lofgren said.

“I was surprised that the prosecutors were surprised. What are they doing over there?” Lofgren said, underscoring running tension between the congressional panel and the department, which is conducting its own investigations.

“We’re not an arm of the Department of Justice,” she said.