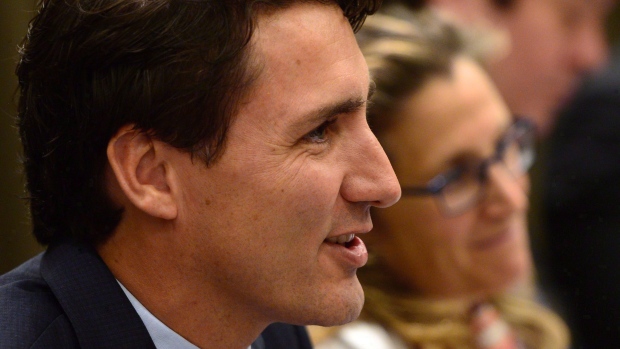 OTTAWA — More than a dozen top business leaders are telling Justin Trudeau it's time for Canada to immediately join the revamped Trans-Pacific Partnership that no longer includes the United States.

An open letter to the prime minister from 18 chief executives comes after last month's decision by Canada to withhold support from what appeared to be a breakthrough agreement by the 11 remaining TPP countries to sign a newly-configured version of the Pacific Rim trade pact.

Trudeau angered allies such as Australia and Japan at the APEC summit in Vietnam when he said Canada needed to address issues such as autos and culture before moving forward.

The Business Council of Canada organized the letter to Trudeau and it represents a range of sectors, including natural resources, manufacturing, transport, food and financial services.

The letter doesn't specifically mention the ever-present threat of a U.S. withdrawal from the North American Free Trade Agreement but says trade diversification is more important than ever.

A spokesman for International Trade Minister Francois-Philippe Champagne says the government is "redoubling" its efforts to consult with stakeholders to make sure Canada gets the best deal possible on the revived TPP.