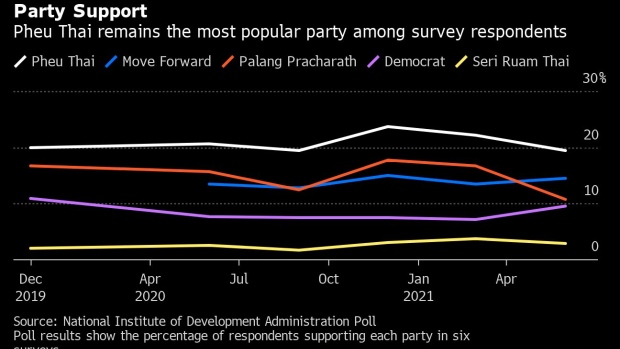 (Bloomberg) -- One of Thailand’s most polarizing figures is staging a comeback, rallying young pro-democracy protesters from 3,000 miles away in a fresh challenge to military leaders who have held power since 2014.

Despite more than a decade in self-exile following a corruption conviction, Thaksin Shinawatra -- a former prime minister and telecoms tycoon -- has maintained support from millions of poor and rural Thais, who have helped him and his allies win the most seats in every general election since 2001.

Now he’s joined an online talk show from Dubai that is surging in popularity among younger citizens with few memories of his five-year stint as prime minister that ended with a 2006 coup. Thousands of demonstrators marked the anniversary in Bangkok on Sunday in a protest called “cars against tanks” led by former Red Shirt leaders who were aligned with Thaksin over the years.

Every second Tuesday for the past few months, Thaksin has appeared on a live show called “Care Talk” that has a combined audience of more than 100,000 on Clubhouse, Facebook and YouTube. It covers a range of topics, with Thaksin alternatively criticizing the government, boasting about global connections and taking audience questions.

“As a kid back then, I looked up to him and always liked the way he speaks,” said Thepparit Imsudsumran, a 26-year-old rapper who listens to the show regularly and recently wrote a song called “Thaksin” that went viral on YouTube. “In this country, sometimes things aren’t what they seem,” he added. “The majority of people in this country know what the truth is.”

Thaksin’s growing popularity among younger Thais comes at a precarious time for the royalist military establishment, which over the past two decades has staged two coups and blocked democratic reforms. Now anger over Prime Minister Prayuth Chan-Ocha’s handling of the virus is exposing cracks within the ruling party and its elite backers, raising the prospect of an early election that could bolster an opposition led by Thaksin’s allies.

“People have the freedom to speak their mind and make predictions about politics -- the government isn’t concerned with that,” said government spokeswoman Rachada Dhnadirek. “We’re focusing on the key tasks at hand, including containing the spread of Covid, giving assistance to people and businesses affected by it, and preparing for the country’s tourism reopening.”

Younger voters helped the Future Forward party win the third-most seats in the 2019 election before the group became the latest pro-democracy organization to be disbanded. Since then students have led unprecedented protests calling for Prayuth’s resignation and reform of the monarchy, the country’s most powerful institution. Those student-led protests are largely leaderless, and Thaksin has said he isn’t directly involved with the gatherings.

Some Future Forward voters like Thepparit are becoming increasingly attracted to Thaksin, who on the show goes by Tony -- the name he used while studying in the U.S. in the 1970s.

“The government is now facing battles on three fronts: the parliament, the protests and Tony,” said Siripan Nogsuan Sawasdee, associate professor at Chulalongkorn University’s Faculty of Political Science, who said Thaksin has been able to draw younger voters recently in a way his allies never could. “Younger voters are the new electorate that every party wants to win.”

For much of the past two decades, Thai politics has been polarized around Thaksin. His supporters viewed him as a champion of the poor who sought to boost Thailand’s profile on the world stage, while his opponents saw him as a corrupt authoritarian populist who sought to silence critics and wanted to become more powerful than the country’s monarch.

Thaksin first came to power in 2001 by offering cheap healthcare, loans and other support for poorer Thais in populous north and northeastern areas of the country, moves that proved so popular his party won 75% of seats in a 2005 election.

The military ousted his government the following year, alleging corruption and disrespect of the monarchy, and he’s mostly lived out of the country ever since after being convicted in a conflict of interest case he has called politically motivated. The anti-corruption agency this month launched another probe into Thaksin’s involvement with flag carrier Thai Airways International Pcl’s aircraft purchases, which led the company’s losses.

While Thaksin’s allies took power again after democracy was restored, Prayuth ousted his sister, Yingluck Shinawatra, in a 2014 coup. During the “Care Talk” latest episode, Thaksin recounted the events that led to his ouster almost exactly 15 years after it happened on September 19, 2006.

“I was naive,” he said. “I have a rural background, with both military and foreign education. I didn’t have an opportunity to learn about the elite or palace society. By the time I understood it, I was already in exile. It’s too late.”

“The problems that I had were with palace circles, not with the king,” he added.

Thaksin said the current infighting in the military-backed ruling Palang Pracharath party could lead to an early election in the next few months.

“When the government is fighting among themselves, the opposition loves it,” Thaksin said, adding that the pro-democracy camp could retake power if voters come out in force. “If it’s a landslide victory, the Senate won’t vote against that. People should strategize.”

‘Why Would I Listen?’

Asked by reporters about Thaksin’s show in February, Prayuth said he didn’t have time to get involved with Clubhouse but had asked authorities to monitor the platform to make sure there’s no spread of misinformation. Thaksin is “an outlaw abroad -- why would I listen?” Prayuth said. “Why do you like to listen and give credit to a person who broke the law?”

The latest constitution written by the military gives the junta-appointed Senate a vote for prime minister, meaning that pro-democracy parties need to win almost two-thirds of seats in the election to control the government. Recent changes to the constitution designed to help bigger parties like Palang Pracharath could also help the Thaksin-backed Pheu Thai party.

Thaksin allies attempted to game the previous election system that favored smaller parties in 2019. But that effort failed after one Thaksin-linked party nominated Princess Ubolratana Rajakanya as its premier candidate, generating a rebuke from King Maha Vajiralongkorn.

Thaksin’s “Brother Tony” nickname is seen as more approachable and younger than Prayuth’s “Uncle Tou,” even though the 72-year-old Thaksin is five years older. Still, hatred of Thaksin might be one of the main things that unites an older, more conservative generation that viewed him as a threat to the monarchy.

Thaksin’s move with the talk show started out as more accidental than intentional, said Surapong Suebwonglee, one of Care Talk’s co-hosts and a former finance minister. Back in February he invited Thaksin to listen to a Clubhouse chat on universal basic income, and the moderator mistakenly made Thaksin a speaker.

“The response to that show was overwhelming,” Surapong said. “It changes Thaksin and his former party from being intangible to being accessible.”