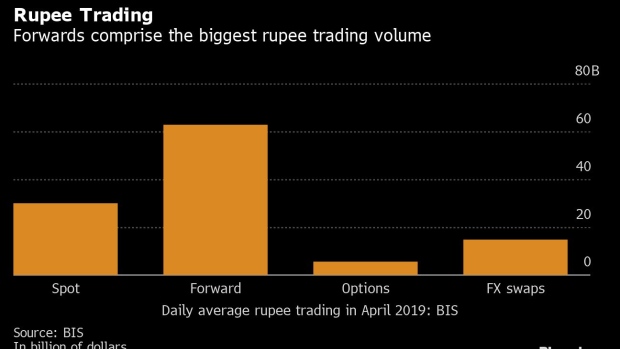 (Bloomberg) -- Exotic foreign-exchange derivatives are making a comeback in India, reflecting the central bank’s efforts to deepen the financial markets.

The return of exotic forex derivatives as well as the introduction of swaptions are part of efforts to give corporates more risk-management options as India’s global trade integration expands. Still, the authorities have tightened rules given that India had to ban derivative products in the aftermath of the 2008 financial crisis when a large number of firms were left with huge losses on bets gone wrong.

“Exotic derivatives, especially the knock-in barrier options for genuine imports hedging, may offer an ideal mix of risk management at a reduced cost than traditional vanilla options,” said Alok Wadhawan, deputy general manager, corporate finance, at Jindal Steel & Power Ltd. “If banks price these derivatives correctly, there will eventually be an uptick in demand for such products from corporates.”

The payoff on these products depends on whether or not the underlying asset has reached a pre-determined price.

India’s corporates primarily hedge their forex exposures in the onshore forward markets, with such contracts far outstripping option trades. The total daily average for outright forwards trading in the Indian rupee globally stood at $62.7 billion in April 2019 versus $5.7 billion in option-related trading, according to the last Bank for International Settlements survey.

Authorities are moving cautiously given the experience of 2006-2008, when banks sold products to customers that were basically bets on the movement of various currencies like the Japanese yen, swiss franc and euro, without any assessment of the corporate’s underlying requirement. These bets blew up in the aftermath of the global sub-prime crisis, leaving companies with huge losses.

The central bank fined nineteen banks including Citibank N.A., Bank of America N.A. and Barclays Plc in 2011 for mis-selling these products, including failure to carry out due diligence on suitability and selling to companies not having adequate risk management practices. It also banned lenders from offering the exotic forex derivative products, allowing only vanilla forwards as hedging tools.

Now, while derivative products have made a comeback, the regulations have been tightened with a distinction between corporate and retail customers. Companies with a minimum net worth of 5 billion rupees are allowed to engage in such transactions. The exotic derivatives allowed are the ones in which losses under any scenario won’t be greater than if the underlying currency asset was left unhedged, implying that leveraged derivatives are not permitted.

The size of initial trades in derivative products, including barrier options, is still small at around $5 million to $10 million, with companies exploring the new products, according to Axis Bank.

“There has been a fair bit of evolution as far as regulations are concerned,” said Neeraj Gambhir, group executive and head of treasury, markets and wholesale banking products at Axis Bank. “The whole approach of regulation has changed very strongly in favor of risk disclosures.”