High lumber prices are back, even as the industry steps into what is normally a seasonal lull.

Prices are climbing amid tight supplies and a pickup in homebuilding. Western Canada is seeing reduced output and the U.S. south is grappling with labor shortages. The U.S. is also expected to double duties on a common Canadian wood next month, adding to costs.

The rise signals that homebuyers will face elevated prices for longer. On Tuesday, lumber futures were trading around US$735.70 per 1,000 board feet in Chicago, more than double the pre-pandemic five-year average around US$356.

Wood prices have been volatile, whipsawing since the pandemic began. They touched record highs amid a COVID-19 inspired home-building boom, then collapsed because sawmills ramped up production and the high prices stifled retail demand. Now, the market is shooting up again. 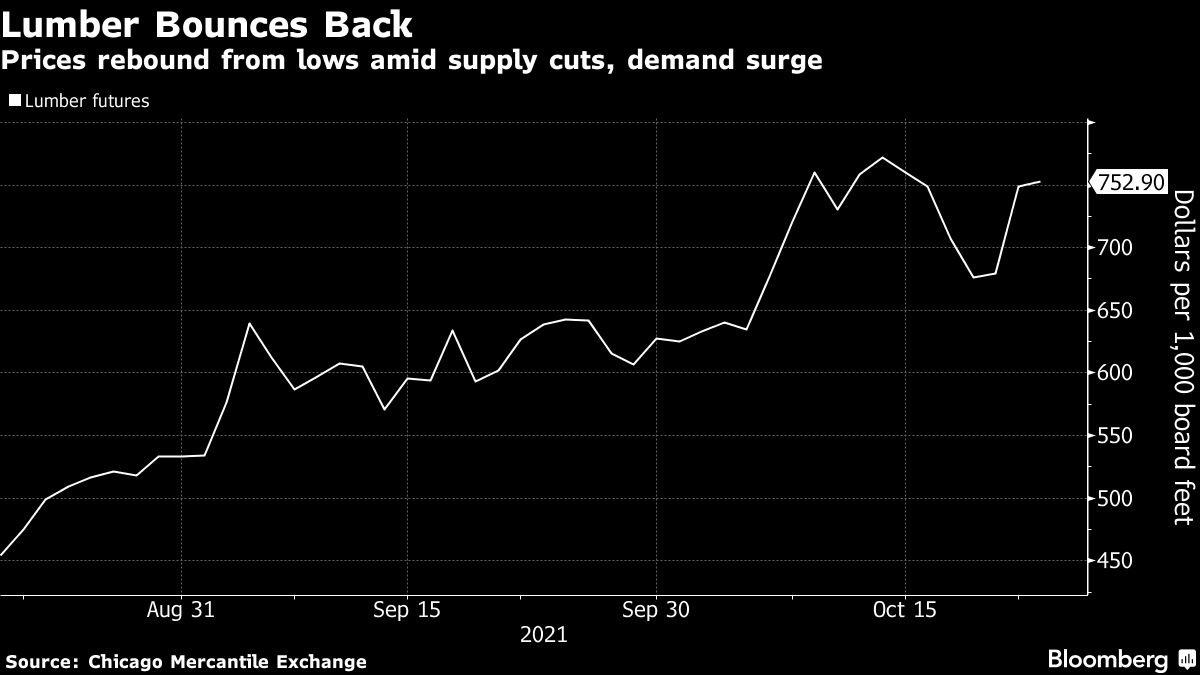 The cost of logs have been soaring in British Columbia, a key producer of softwood lumber used in homebuilding. Several sawmills in the Canadian province curtailed production as their costs exceeded the sales prices.

Log costs in British Columbia are determined by stumpage rates, which the government adjusts each quarter at a lag to lumber futures. Earlier this month, some of the rates soared as much as fourfold from a year ago.

Meanwhile in the U.S. south, where a large amount of North America’s lumber is produced, labor issues are plaguing the mills, according to Brian Leonard, an analyst with RCM Alternatives in Chicago.

Because of the supply bottlenecks, Leonard expects prices to keep rising through the first quarter of 2022. That’s bad news for home buyers.

“We’re seeing futures prices going back up, and that will undoubtedly mean the price of retail lumber builders buy goes up,” said Jerry Howard, chief executive officer of the National Association of Home Builders.

The price surge earlier this year added as much as US$40,000 to the price of the average U.S. house and forced some construction companies to stop building, according to the association.

Still, there are factors that could damper demand and prevent prices from escalating further. Interest rates are likely to rise, and home prices and inflation are climbing, said Greg Kuta, chief executive officer of Westline Capital Strategies Inc., which specializes in lumber-trading strategies.

“The potential for organic, spillover demand is still there, but I don’t think it will surprise home builders like it did last year,” Kuta said.