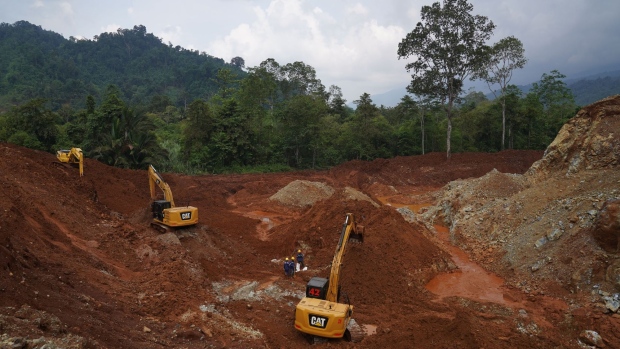 Excavators in a pit at a nickel mine operated by PT Teknik Alum Service in Morowali Regency, Central Sulawesi, Indonesia, on Thursday, March 17, 2022. Indonesia, the world’s top nickel producer, will raise production capacity of the metal after prices soared past $100,000 a ton, while the coal market is unlikely to get similar relief. Photographer: Dimas Ardian/Bloomberg , Bloomberg

(Bloomberg) -- Indonesia’s nickel investment is set to triple in one of the country’s biggest industrial parks, following a 2019 ban on raw ore exports that President Joko Widodo says will help the economy produce higher-value goods.

Spending on projects in Morowali Industrial Park in Sulawesi will reach $18 billion in 2022, compared with $6.7 billion in 2019, when the ban was imposed, according to Luhut Panjaitan, the coordinating minister for investment & maritime affairs.

“Indonesia’s economy is transforming,” Panjaitan said Monday in an interview from Morowali, about 1,000 miles northeast of Jakarta. “It will no longer rely on raw commodities, but shifting into more value-add industries.”

The world’s largest producer of nickel, used in steelmaking and battery production, sees banning exports of raw metals as a way to foster development in the downstream industry, even after the move triggered protests from buyers. Accelerating development of the Morowali industrial complex will help Indonesia exceed its full-year production target of 1.4 million tons of nickel as more smelters are built, said Panjaitan.

Among them are QMB New Energy Materials, majority-owned by Chinese battery materials supplier GEM Co., which has started producing 30,000 tons-a-year of nickel hydroxide chemicals for use in batteries.

Another plant that is set to start operations this year is one by CNGR Advanced Material Co. Ltd., which makes materials for batteries. A lithium battery recycling plant by PT Indonesia Puqing Recycling Technology, also began site construction in January.

Next, the government will work on a set of rules to allow imports of used lithium battery to be used in recycling industry, according to Panjaitan.

“Indonesia wants its nickel industry to be sustainable by inviting industry players in battery recycling to invest here,” Panjaitan said.