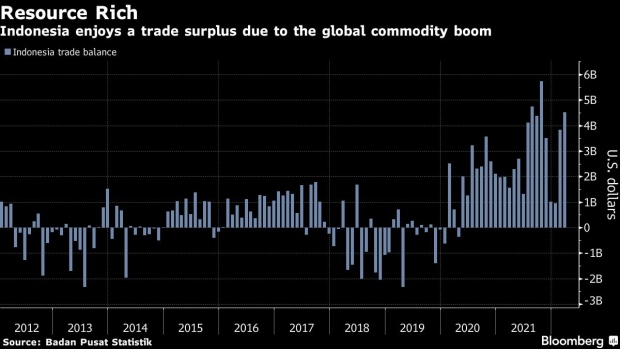 The Indonesian economy grew steadily in the first quarter as stronger exports helped offset the omicron-induced weakness in domestic consumption.

Gross domestic product in the three months through March grew 5.01% from a year earlier, the country’s statistics agency said Monday. That compares with the median estimate in a Bloomberg survey for a 4.95% expansion, and a 0.7% drop in the same period last year.

Trade is a bright spot for Southeast Asia’s largest economy, which has served as a key exporter of coal, palm oil and minerals amid a global shortage in commodities after Russia’s invasion of Ukraine. After a brief ban on coal shipments at the start of the year to secure domestic supplies, exports shot up to record levels in March.

That’s given Indonesia a timely boost as the highly transmissible omicron strain led to a surge in Covid-19 infections and deaths in February. The government restricted operations of shopping malls, restaurants and tourist spots, dampening private consumption that accounts for over half of GDP.

The first-quarter numbers put the nation on track to hit its full-year growth target of 4.8%-5.5%, especially now that Covid-19 cases have declined sharply and most virus curbs scrapped. It will also be a crucial data point for the central bank as it assesses the pacing of its exit of monetary accommodation, against the backdrop of brewing price pressures and faster tightening by the Federal Reserve.