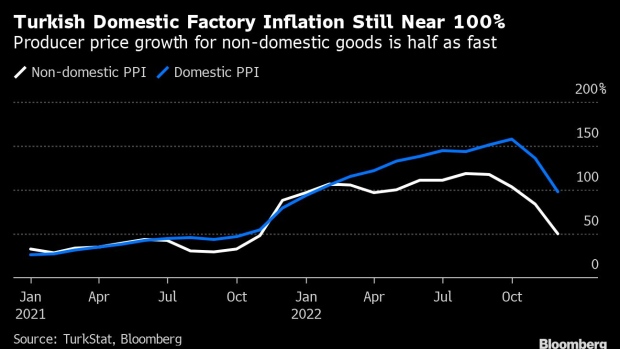 A record haul by Turkish exporters last year is masking the latest anomaly to emerge as President Recep Tayyip Erdogan juggles competing priorities in the months before elections.

For some of the companies hobbled by a local currency they deem “overvalued,” the appeal of foreign markets is increasingly no match for demand at home — especially as fears of a recession stalk parts of Europe, the main destination for Turkish shipments abroad.

Global weakness last month was such a drag on new export orders that they cooled off to a greater extent than total new business among Turkish manufacturers, according to S&P Global and the Istanbul Chamber of Industry.

And even in an economy where inflation is still raging, firms like textile manufacturer System Denim are finding it easier to pass on the higher costs to Turkish buyers.

“Here, consumer habits accept a high-inflation environment,” said System Denim’s owner, Seref Fayat. “Inflation in the EU is a 10th of ours and the increase in costs cannot be reflected in prices.”

It’s an aberration rooted in a government approach to pumping selective stimulus into the economy while keeping the Turkish currency on a leash. Authorities have also leaned on exporters by requiring them to convert 40% of their foreign income into lira.

Although skewed by high energy prices, imbalances grew worse last year, when Turkey ran a trade deficit that more than doubled to over $110 billion.

With the country awash with money, the lira hasn’t weakened enough to reflect inflation differentials and changes in the value of the currencies of Turkey’s trade partners. Despite losing close to 29% against the dollar last year in nominal terms, the lira’s real effective exchange rate actually increased 18%, according to the Bank of International Settlements.

At stake is Erdogan’s ability to build what he envisions can become “the manufacturing center for Africa, Asia and Europe.”

But rather than giving domestic businesses an edge over rivals, the government is now fielding demands from industries ranging from metals producers to clothing manufacturers for a more competitive exchange rate.

On Tuesday, the head of the Aegean Exporters’ Associations called for devaluing the lira by about a third to turn the currency to Turkey’s advantage while discouraging imports and preventing unemployment.

The challenges come at a fraught political moment for Erdogan as he doles out favors ahead of the critical election in May. For months, the Turkish leader has tried to showcase the successes of policies that prioritized local production and recently presided over the rollout of the country’s first domestically made electric vehicle.

A stable lira has meanwhile become the cornerstone of Erdogan’s efforts to steady inflation that’s been mostly in double digits for the past four years and hovered over 85% not long ago.

Among the few top officials to address the issue of what’s in store for the lira, Treasury and Finance Minister Nureddin Nebati only said over the weekend that Turkey needs an exchange rate at “an optimal level” — not too weak but not too strong so as not to drive up imports and deter domestic producers.

Already home to factories for the likes of Ford Motor Co., Turkey has sought to grow its clout in international commerce by seizing on the disruptions caused by the global pandemic and Russia’s invasion of Ukraine.

But many goals remain far off. Erdogan has said that he wants to turn Turkey into a top 10 global exporter — though the latest figures from the World Bank show it’s lagging far behind in the 28th spot.

Companies that in the past sent much of their output abroad are left with a complicated trade-off: take advantage of higher margins at home or sell abroad to get foreign currency.

A report on Wednesday showed home-appliance exports falling 9% on an annual basis while domestic sales increased by the same magnitude. System Denim will likely make a similar choice.

“It will be especially easier to sell goods in the domestic market than abroad in the first half of this year,” said Fayat.