The economy is experiencing a 'fasten your seatbelts' moment: Export Development Canada's Hall

Canada’s economic recovery likely forged ahead in the first quarter, with a recovering export sector and red-hot housing market bringing total output to the cusp of its pre-pandemic level.

Statistics Canada is expected to report on Tuesday that gross domestic product expanded at an annualized pace of 6.8 per cent in the first three months of the year, according to a Bloomberg survey of 17 economists. That follows a 9.6 per cent gain in the fourth-quarter, and would bring production to within 1.6 per cent of where it was at the end of 2019.

While the expansion could slow down sharply in the second quarter amid a fresh wave of lockdowns, a strong report this week will stoke confidence in the country’s resilience to the containment measures. Economists are anticipating the pace of growth will return to above 6 per cent in the second half of 2021. 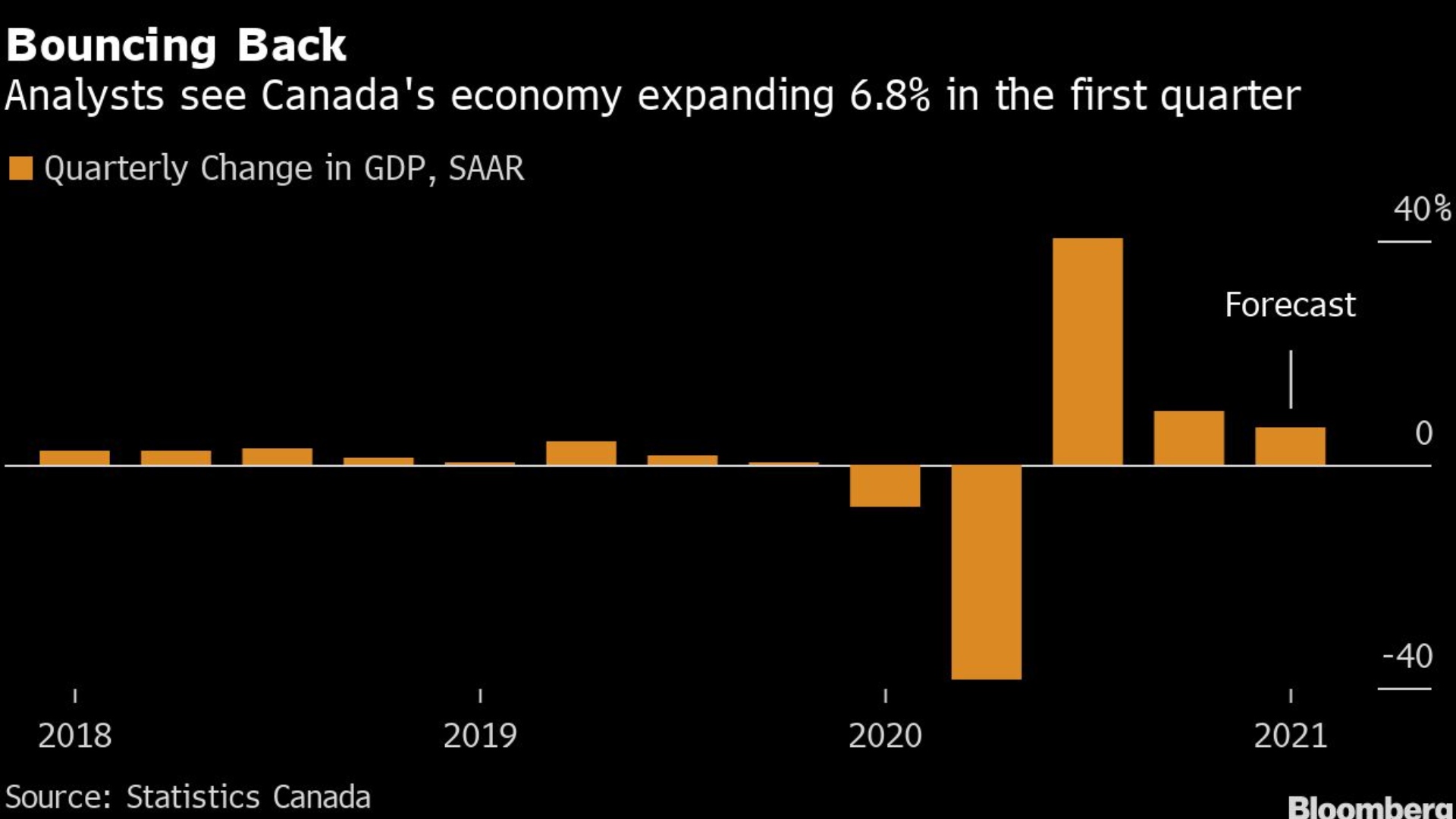 “The good news is as Covid restrictions seem to relax, the economy can bounce back quite quickly,” Royce Mendes, an economist at Canadian Imperial Bank of Commerce, said by phone.

One reason for optimism is that the economy has been recovering with little support from consumers, who have held off from spending over the winter months amid the restrictions to activity. Growth in consumer spending was probably flat in the first quarter, much as it was at the end of 2020.

That suggests pent-up demand could be building to drive outsize growth later in the year.

“The more interesting timing is the reopen period,” Beata Caranci, chief economist at Toronto-Dominion Bank, said by phone. “What does that normal look like for people? Does it unleash spending so that people start spending that excess savings?”

Exports and housing investment likely led the way at the start of 2021, along with businesses rebuilding inventories.

New home construction and real-estate sales rose to records at the start of 2021. Exports recorded solid gains, led by a strong rebound in aircraft production and some commodities. Restocking of inventories, meanwhile, was the main contribution to growth at the end of last year.

Adding to the tailwinds is an accelerating vaccination effort and continued government support, after Finance Minister Chrystia Freeland announced a new wave of spending in April.

The potential for a sharp rebound and a faster-than-expected full recovery is already prompting the Bank of Canada to start paring back its stimulus and warning of higher interest rates. Economists are anticipating a healthy 6.2 per cent expansion for all of 2021, only slightly behind a U.S. recovery projected at 6.5 per cent.

To be sure, it will be choppy and the second quarter could be very weak.

In April, provinces including Ontario, Quebec and British Columbia shut down parts of their economies to curb activity. The third wave of lockdowns has already led to fresh job losses, with employment falling 207,100 during the month. Retail sales, meanwhile, fell 5.1 per cent. That economic weakness is likely to extend in May.

Along with first-quarter data, Statistics Canada will release an early read on activity in April, which is likely to be negative.

“April’s GDP looks like a clunker,” Doug Porter, chief economist at Bank of Montreal, said by phone. “Every number we have for April has a red sign in front of it.”

But that could change quickly. About half of Canadians have now received a first shot of a vaccine and infections have declined in most of the country, raising the prospect of more reopenings in high-contact industries. Prime Minister Justin Trudeau’s government flagged a 75 per cent vaccination rate as a potential marker for looser restrictions, including at the Canadian border.

“Canada’s economy is expected to post some impressive bounce-backs in employment and retail trade in coming weeks,” Porter said in a report released on Friday.