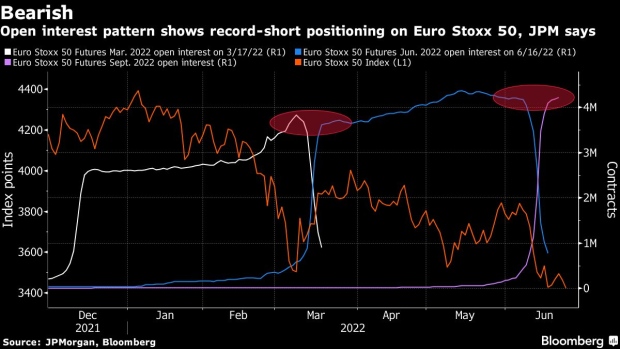 “We conclude that Euro Stoxx 50 futures’ positioning likely remains close to record-short, which could lead markets to respond to news asymmetrically, with a higher likelihood of sharp moves to the upside,” JPMorgan strategists led by Davide Silvestrini said in a note on Wednesday.

The strategists analyzed open interest and short positions in Euro Stoxx 50 futures after the June 17 expiry, as quarterly expiries and futures rolls can offer strong insight into investor positioning, they said. Market participants remain very short the index, with short interest still near a record high, according to JPMorgan.

European stocks continue to struggle as worries about an economic slowdown mount amid rising inflation and aggressive monetary tightening. Ray Dalio’s Bridgewater Associates has built a $10.5 billion bet against European companies, almost doubling its wager in the past week to its most bearish stance against the region’s stocks in two years.

The euro-area benchmark Euro Stoxx 50 has dropped over 20% this year, although strategists say the bottom may be near and on average forecast 13% upside by the end of 2022, according to a Bloomberg survey.

To be sure, while European markets are currently more prone to “squeezes” to the upside, these moves would require substantial positive surprise, such as improved macro-economic or inflation data, which is “not necessarily on the cards in the short-term,” Silvestrini said.