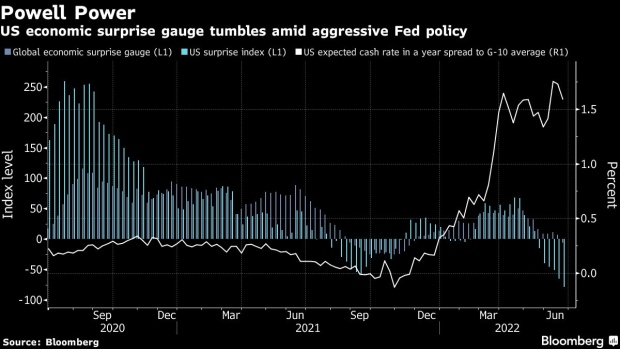 (Bloomberg) -- Australia’s shorter-maturity bonds are rallying in a way never before seen during a central-bank tightening cycle, adding to signs investors fear the world is tipping toward a recession.

The nation’s three-year yields tumbled 43 basis points this week to 3.20%, the largest drop since August 2011, when it was becoming clear the Reserve Bank of Australia had stopped hiking as Europe’s debt crisis worsened. Yields have only fallen this fast when the RBA was either cutting rates or on hold, yet its July meeting is expected to see a half-point increase.

Global bonds have come roaring back in recent days to unwind some of this year’s slump. Investors are piling back in as weakening data adds to concern over the determination of the Federal Reserve and its global peers to curb inflation by tightening policy. This week alone saw a gauge of US business activity slide to a two-year low, and Citigroup’s US Surprise index fall to the lowest since the depths of the pandemic.

“Concerns of a global-growth slowdown and overstretched valuations have been the key drivers” for this week’s Aussie bond rally, said James Wilson, a senior portfolio manager at Jamieson Coote Bonds, which oversees the equivalent of $3.1 billion. “We are seeing great interest from institutional and retail investors looking to add duration to their portfolios.”

Australia’s dollar and bond yields have tumbled this week as concern about slowing global demand pummeled the prices of the nation’s commodity exports. The extra yield on Aussie 10-year notes over Treasuries has shrunk to about 60 basis points from more than 90 basis points earlier in June. WTI crude has slumped 15% over the past two weeks, while iron-ore futures are heading for a third weekly loss.

Swaps traders are still certain the RBA will raise its cash rate target from the current level of 0.85% in July, assigning about 80% odds to a 50 basis-point hike. At the same time, they have trimmed back expectations on the pace of this year’s tightening, with the benchmark now expected to end the year at 3.25%, versus an end-December prediction of more than 4% at the start of this week.

“The Australian 10-year bond contract was one of the most heavily shorted in the Group-of-10, and this has squeezed aggressively as RBA rate bets came back down,” Jamieson Coote’s Wilson said