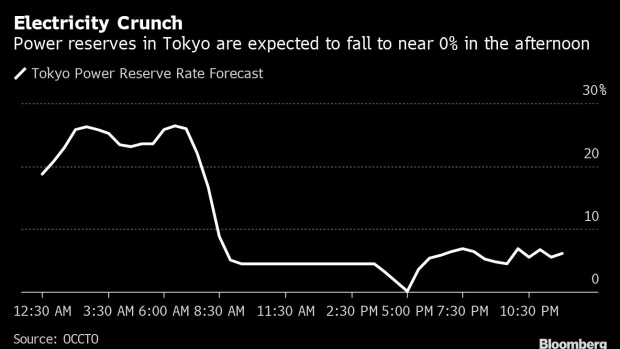 (Bloomberg) -- Japan is making a new appeal to Tokyo residents to conserve power with unusually hot weather expected to boost demand for cooling and stretch the city’s grid close to its limits.

Electricity supply in the capital is set to be “very tight” for 30 minutes from 4:30 p.m. local time, and people should conserve power to the best of their ability from 3 p.m. to 6 p.m., the Trade Ministry said on Sunday. Temperatures will be as high as 35 degrees Celsius (95 Fahrenheit), according to the country’s meteorological agency. The 30-year average is 22.5 Celsius, according to data compiled by Bloomberg.

The government and utility providers have repeatedly warned that electricity supply will be tight this summer, and have encouraged people to conserve power, including by offering rewards to people to cut back on their usage. Japan in March issued a power supply warning, the first of its kind, after supply neared critical levels in Tokyo and has since introduced a new system to warn people to prepare for potential crunches.

Residents are being asked Monday to turn off lights in rooms they are not using and to use air conditioning units in an appropriate way. The period around 4:30 p.m. is crucial because solar power generation begins to decline as the sun goes down.

Read more: Japan Power Crisis Was a Decade in Making and Won’t Go Away

The power reserve ratio, which measures the spare capacity of electricity, is slated to drop as low as 0.3% for the Tokyo area around 5 p.m. A minimum of 3% is considered necessary for stability on the power grid.