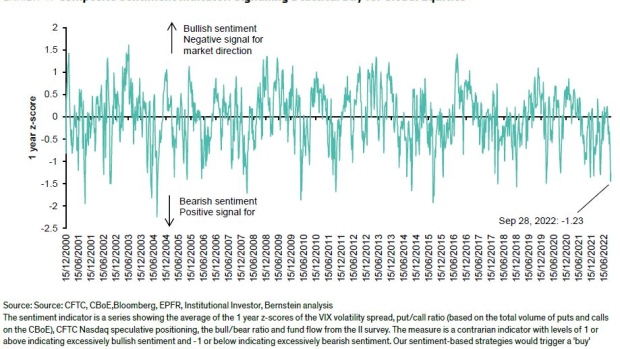 (Bloomberg) -- Sentiment has turned so bad for global equities that an indicator developed by Sanford C. Bernstein & Co. has sent a buy signal.

“Another bear market rally is very possible,” strategists including Mark Diver and Sarah McCarthy wrote in a note. “Investor sentiment has now reached such negative levels” that the odds of global equities making positive returns over the next four weeks is greater than generating losses, they added.

Four out of five components of Bernstein’s Composite Sentiment Indicator including volatility, put/call ratio, investor survey and equity fund flow data have reached negative extremes. Over the past 22 years, the indicator’s buy signals have been followed by positive returns in the next four weeks over 70% of the time, they wrote.

Indeed, bearish calls have grown in recent days after the Federal Reserve’s latest jumbo rate hike, which has roiled every corner of the market. This week alone Goldman Sachs Group Inc. and BlackRock Inc. turned more bearish on equities for the short term, with the former cutting equities to underweight over the next three months and the latter advising investors to “shun most stocks.”

To be sure, Bernstein said its study doesn’t imply that the bear market is over and investors should remain cautious over the medium term as higher interest rates increase odds of a recession especially in Europe.