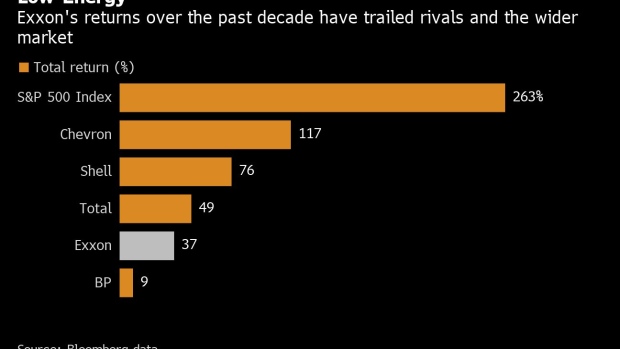 Once the gold-standard of Big Oil, the stock closed Monday at its lowest since October 2010, amid a slump in oil prices due to concerns about weak demand coupled with a glut. The S&P 500 also posted its worst one-day decline since October.

But for Exxon, which dropped out of the index’s top 10 largest companies by market value for the first time last year, the malaise runs deeper than the state of the crude market.

Chief Executive Officer Darren Woods is running a counter-cyclical strategy by investing heavily in new oil and gas assets, at a time when many investors are demanding energy companies improve returns for shareholders. Some shareholders are even demanding a plan to move away from fossil fuels altogether.

Exxon is betting on a “windfall of cash” to arrive from its investments sometime in the mid to late 2020s, said Noah Barrett, a Denver-based energy analyst at Janus Henderson, which manages $356 billion. “Right now there’s higher value placed on generating cash flow today.”

Exxon is ramping up capital spending to more than $30 billion a year, without a hard ceiling, as it develops offshore oil in Guyana, liquefied natural gas in Mozambique, chemical facilities in China and the U.S. Gulf Coast, as well as a series of refinery upgrades. Woods is convinced the world will need oil and gas for the foreseeable future and sees an opportunity for expansion while competitors shy away from such long-term investments.

The short-term cost of those investments is that Exxon can’t fund dividend payouts with cash generated from operations, instead resorting to asset sales and borrowing, according to Jennifer Rowland, an analyst at Edward Jones & Co. Exxon is the “clear outlier” among Big Oil companies on that front, she said. Exxon declined to comment.

Exxon’s current challenges stem in large part from flag-planting deals made when commodity prices peaked during the past decade. It spent $35 billion on U.S. shale gas producer XTO Energy Inc. in 2010 when shale oil promised outsize returns. It has invested $16 billion in Canadian oil sands since 2009, only to remove much of those reserves from its books. Former CEO Rex Tillerson’s 2013 exploration pact signed with Russia was caught behind a wall of sanctions and later abandoned.

To contact the editors responsible for this story: Simon Casey at scasey4@bloomberg.net, Carlos Caminada