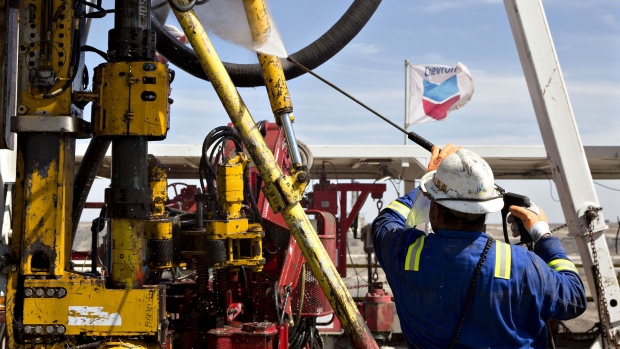 (Bloomberg) -- President Joe Biden, who has asked OPEC+ to raise oil production faster to tame runaway energy prices, just got a gift on his home turf instead: a blockbuster growth forecast for U.S. shale production from the country’s two biggest oil companies.

Exxon Mobil Corp. said Tuesday it plans to boost output by 25% this year in the Permian Basin, the biggest U.S. oil-producing region. That comes four days after Chevron announced it will ramp up its own Permian supplies by 10%, from an even larger production base. Such aggressive targets from the Western world’s largest oil majors are a surefire sign that U.S. shale is back to growth mode after cuts in 2020 and a lackluster 2021.

With oil trading near its highest since 2014 and inflation raging across developed-world economies, extra supply from the U.S.  — or anywhere else for that matter — would be welcomed by the Biden administration. But resurgent domestic output brings its own dangers. Recent history has shown that too much shale production can quickly overwhelm worldwide demand. It also risks upsetting members Organization of the Petroleum Exporting Countries and the group’s allies, who have crashed the market twice in the past eight years through damaging price wars in response to U.S. shale growth.

Still, for now, global supplies remain tight. OPEC on its own can’t pump more to meet rising demand and so U.S. supply growth is needed, said Aaron Brady, executive director for IHS Markit. What Exxon and Chevron’s plans reveal “is that U.S. producers are going to be able to manage dual objectives in 2022,” he said. “They’ll be able to return record cash to investors and also grow volumes to help meet fast-recovering world oil demand.”

Even before the latest production announcements, analysts were expecting big growth in 2022. The Energy Information Administration said on Jan. 11 that the U.S. will end the year producing about 12.2 million barrels of oil a day, 630,000 barrels a day more than current levels and higher than Saudi Arabia’s current output. And that’s a more conservative forecast than others: ConocoPhillips’s Chief Executive Officer Ryan Lance, for instance, said last week that U.S. crude output may grow by 800,000 barrels a day this year.

U.S. shale could “surprise the market on the upside” on production growth this year, said Artem Abramov, an analyst at Rystad Energy.

Publicly traded independents such as Pioneer Natural Resources Co., EOG Resources Inc., Diamondback Energy Inc. and are well aware of the risks of growing too fast and have so far indicated supply increases of no more than 5% this year. Investors will be watching their forecasts closely over the next few weeks as they report earnings and reveal more details about their 2022 plans.

But the U.S. majors don’t think their Permian expansion plans buck the production discipline trend that’s become a mantra among energy investors. That’s because much of their growth in the U.S. will be offset by naturally declining fields elsewhere in their global portfolios. Independent operators, by contrast, don’t have such offsets, meaning their growing supply flows directly into the market.

Exxon’s 25% production increase will be “high-value growth” and comes on top of the 460,000 barrels of oil equivalent produced from the Permian Basin last year, CEO Darren Woods said on a call with analysts on Tuesday. Chevron, which produced an average of 608,000 barrels a day from the basin in 2021, also indicated that its Permian barrels are some of the most profitable anywhere in its global portfolio.

Exxon and Chevron “are resuming the ambitious growth plans of three to four years ago that were delayed by the pandemic,” Rystad’s Abramov said. And with more shale production now concentrated into fewer hands after a series of mergers over the past two years, “Exxon and Chevron will account for more of the forward growth profile than they did historically,” said Stephen Richardson at Evercore.

Still, while the extra barrels may help to balance out some of the surging oil consumption as economies bounce back from Covid-19, they may not be enough to bring about a substantial reduction in prices.

“U.S. production may surprise to the upside this year, but not by so much that it will significantly bring down oil prices,” said Elisabeth Murphy at ESAI Energy LLC. “On top of that, OPEC+ is having trouble lifting output to add the additional barrels.”