Exxon Mobil Corp. shares rose to the highest intraday level ever Wednesday and are on track to close at a record, stoked by an almost 60 per cent surge in crude prices that’s lifting oil supermajors and complicating efforts to fight global inflation.

North America’s largest oil company traded as high as US$105 in New York, topping its previous record set in 2014 amid a 71 per cent advance this year. Investors are piling into energy stocks as demand for oil from reopening economies and diminished supply due to the war in Ukraine spark an almost 60 per cent surge in crude prices, complicating efforts to fight global inflation.

“Every conceivable headwind has become a tailwind,” Evercore ISI analyst Stephen Richardson wrote in a note upgrading Exxon shares to a Street high on Wednesday. He added that a “structural supply deficit has opened in crude” and passive funds are flowing into the sector.

Energy is by far the best performing sector in the stock market this year, with the group up 65 per cent in 2022 compared with a 13 per cent decline for the S&P 500 Index. Exxon is among the 10 best performing stocks in the broad equities benchmark, and its super-charged rise has exceeded even Wall Street’s expectations. The stock has skyrocketed 222 per cent since touching a roughly two-decade low in October 2020 as it recovered from the pandemic and its loss in a proxy fight to activist investor Engine No. 1.

In addition to rising oil prices, the company has also capitalized on a broader surge in fuel costs with its massive gasoline and diesel refining operations. Exxon is following rivals Chevron Corp. and ConocoPhillips, both of which hit record highs a few months ago. 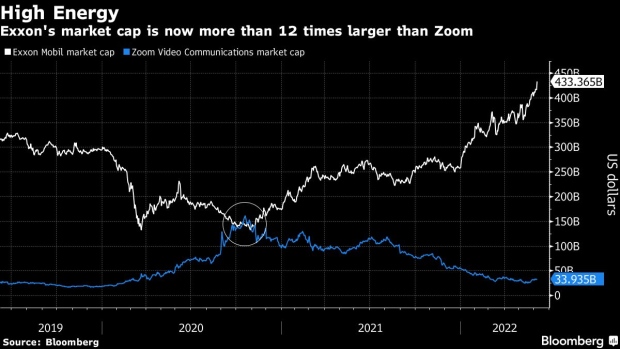 Two analysts hiked their price targets on Exxon shares Tuesday after the stock breached US$100 for the first time since 2014. Goldman Sachs analyst Neil Mehta sees a 22 per cent return for Exxon on expectations that Brent oil prices will average US$135 per barrel in the second half of 2022. And record gasoline prices and refining margins prompted Credit Suisse analyst Manav Gupta to raise his price target to US$115 from US$102.

Exxon “still has room for more valuation re-rating” after the stock sold off in 2020 on balance sheet concerns, JPMorgan analyst Phil Gresh wrote in a research note, adding the company is enjoying a “synchronized up-cycle” for its upstream, downstream and chemicals businesses.

Despite the price target hikes, Exxon Mobil is still one of Wall Street’s least favorite oil companies, compared with the wunderkind, smaller shale driller Diamondback Energy Inc. Among all the S&P 500 Energy Index members, analysts expect only Exxon and Valero Energy Corp. to see a negative potential return over the next 12 months. There stock also has 18 hold recommendations and just 12 buys.