There’s evidence oil majors do assess the climate consequences of their future plans. Exxon had internal projections, never made public, that showed a 17 per cent rise in carbon-dioxide emissions over the next five years, according to company documents reviewed by Bloomberg. In a statement, Exxon said those projections were “a preliminary, internal assessment of estimated cumulative emission growth through 2025” and that its projections had since changed. 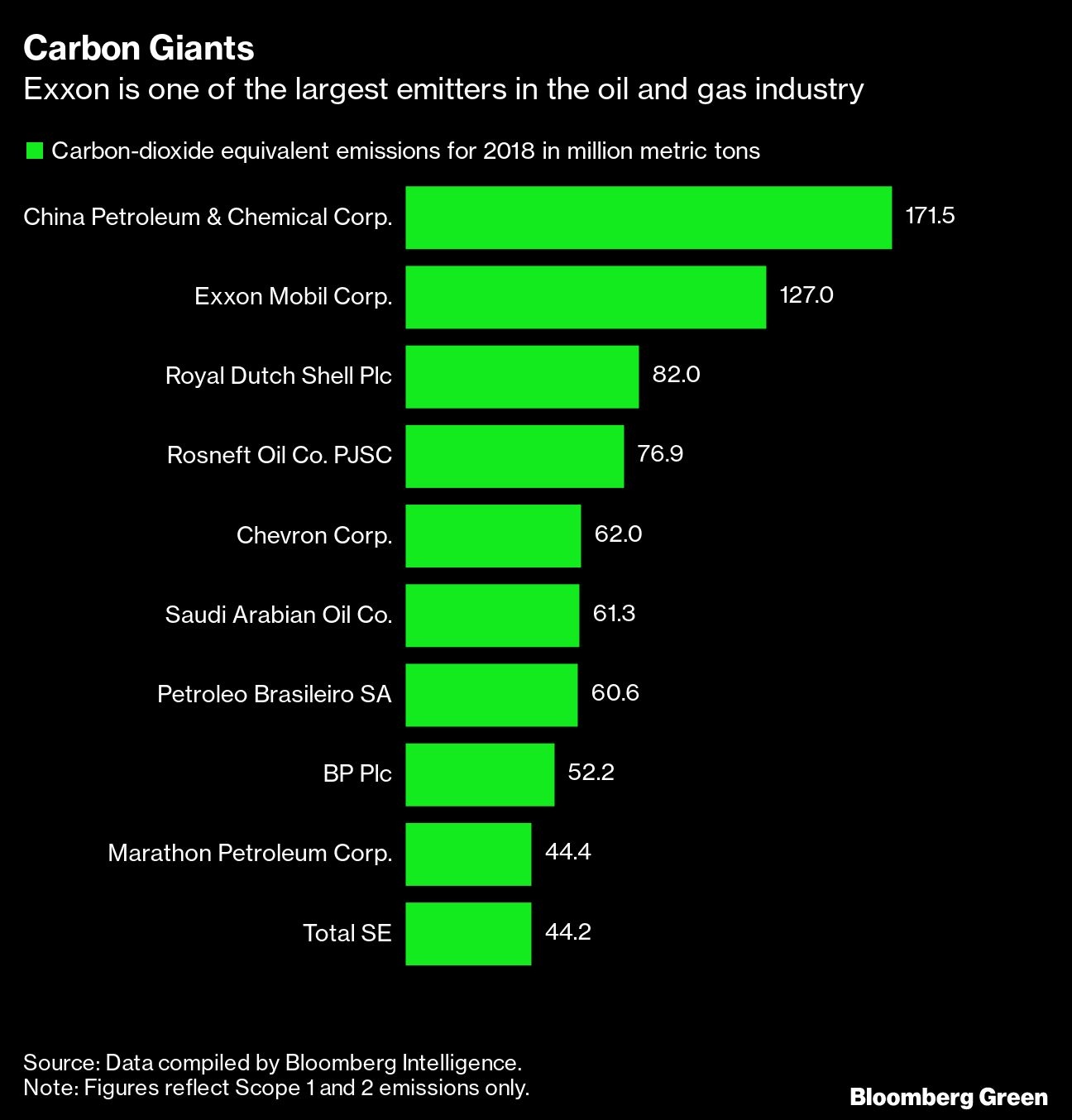 Yet the largest U.S. oil company, like other publicly traded oil producers, only releases backward-looking emissions totals. “We would like to see Exxon make its emission projections public,” said John Hoeppner, head of Legal & General’s U.S. stewardship and sustainable investment unit. The fund manager is a top 20 Exxon shareholder, according to Bloomberg data. “Ambitious targets for absolute emissions are a key part of our assessment.”

“It’s fascinating to me that Exxon puts so much effort into tracking these [future] emissions internally, yet chooses not to disclose them,” said Andrew Logan, senior director of oil and gas at Ceres, a nonprofit network of institutional investors who focus on climate risk and manage US$29 trillion in assets.

Exxon has never made a commitment to lower either its oil and gas production or eliminate greenhouse gases, so perhaps it’s not surprising that the company doesn’t publicize expectations around emissions. But even oil giants with bold targets to neutralize emissions by mid-century, such as BP Plc and Royal Dutch Shell Plc, don’t allow investors to scrutinize their emissions forecasts for next year.

Incomplete disclosures across the industry make it harder to judge the feasibility of plans to adapt to climate change or to track progress on long-term emissions goals. Short-term emissions forecasts “could add credibility,” said Jonas Rooze, head of sustainability at BloombergNEF, as investors parse climate-driven scenarios that may be 10 or 20 years out.

A gap in information can also raise questions for investors. The fact that Exxon tracks emissions forecasts without updating its investors means “either the company sees this as a competitive advantage, which seems sort of absurd,” Logan said, who doesn’t own Exxon shares, “or the company feels like it has something to hide.” The internal projections reviewed by Bloomberg included emissions forecasts for 2021 and 2025.

Most publicly traded oil giants reveal annual figures for direct emissions from company operations, known as Scope 1 and Scope 2 figures. These are usually released a few months after the year has been completed, with adjustments made to reflect mitigation efforts.

Beyond that Exxon stands out for its more limited disclosure. It doesn’t disclose accounting for Scope 3 emissions generated when customers burn fossil fuels, a figure that comprises approximately 80 per cent of total greenhouse gases at large oil companies. All the European supermajors disclose those figures, as does American counterpart Chevron Corp. That leaves independent analysts—and investors— to estimate the full measure of Exxon’s impact on global warming.

An Exxon spokesperson referred to the company’s annual sustainability report that declares emissions created by customers “are not within [Exxon’s] direct control” and “the result of choices consumers make.” Science-Based Targets Initiative, an advocacy organization that sets standards for corporate climate plans, says that companies whose emissions mostly come from customers or suppliers set targets that reflect Scope 3 numbers; companies that fail to do so can’t be in alignment with the Paris climate agreement.

Incomplete disclosures around emissions are already driving away some large investors. The Church of England Pensions Board, which has assets worth £2.8 billion (US$3.6 billion), is in the process of divesting its Exxon shares. A spokesperson for the fund attributed the outcome to investing in passive funds that exclude companies that don’t set targets covering Scope 3 emissions.

‘We would like to see Exxon make its emission projections public’

This year saw BlackRock Inc. add its weight to the Climate Action 100+ activist platform, bringing total assets under management by members of the group to more than US$41 trillion. The world’s largest fund manager held a 6.8 per cent stake in Exxon as of June 30. The risk for oil companies is that powerful investors focused on climate risk will come to expect more than updates on proven reserves. With two of the world’s largest economies, China and the European Union, setting firm dates by which they plan to neutralize emissions, investors will increasingly need to assess how oil producers fit into a lower-carbon future.

For investors, these details are an important way to gauge if oil reserves are in danger of becoming stranded assets, an industry term for uneconomic resources. “The companies that face the highest risk should be the ones thinking about how they change their business,” said Rooze of BNEF.

Rooze sees Exxon among those facing higher risk “because it has very big reserves that’ll take them a long time to produce.” The longer the time the company needs to realize value on its fossil-fuel assets, the higher the risk that it may not be able to fully extract that value which will leave the company with stranded assets and slap shareholders with losses. Even as COVID-19 has scrambled the industry, forcing Exxon to slash capital expenditures, the company has said it will continue making investments in oil and gas once demand returns.

Another key metric to judge whether an oil company can survive the energy transition is to track its investment into clean energy relative to its spending on fossil fuels. Only two out of 39 oil companies that Rooze is tracking report those figures reliably: Lukoil PJSC and Valero Energy Corp.

Projects that are otherwise highly publicized by an oil company can also be shrouded in limited disclosure. For more than a decade, for example, Exxon has touted the use of algae to make biofuels. But emission-reductions metrics for that effort were missing from a roster of mitigation projects that would factor into Exxon’s forecast for 2025 emissions, according to internal documents.

A spokesperson referred to the company’s 2020 sustainability report which notes progress towards producing 10,000 barrels per day of algae-based biofuel by 2025. That’s the same date by which Exxon had been planning, before the pandemic, to increase oil and gas production by about 1 million barrels per day.

“The natural next step is for investors to push for much more transparency,” said Logan. “It’s going to be increasingly hard for Exxon to hide from investor requests.”