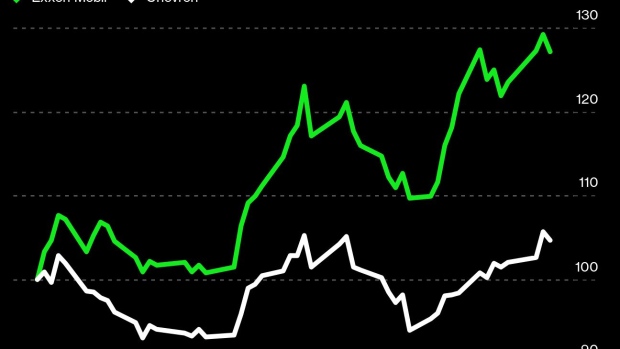 A smoke stack at the Exxon Mobile Corp. Altona refinery in Altona North, Victoria, Australia, on Sunday, Feb. 14, 2021. Exxon Mobil became the latest oil major to announce it would shut down its Australian refinery operations, leaving the nation with just two facilities. , Bloomberg

Exxon Mobil Corp. has already upped its climate plans, only three months into an activist investor’s campaign to force change inside the company. Now the group, Engine No. 1, is pushing the oil giant to set a new goal: net-zero greenhouse gas emissions by 2050.

Engine No. 1 released a letter on Monday reiterating its call for Exxon to overhaul its board of directors by adding four new members who have the expertise to steer the company towards climate neutrality. That’s a goal already adopted by European oil producers such as BP Plc, Royal Dutch Shell Plc and Total SA. Exxon and fellow U.S. supermajor Chevron Corp. have resisted.

“This is not just a climate issue but a fundamental investor issue—no different than capital allocation or management compensation—given the immense risk to Exxon Mobil’s current business model in a rapidly changing world,” San Francisco-based Engine No. 1 wrote in a letter sent to the company. The group is backed by the California State Teachers’ Retirement System, the second-largest pension fund in the U.S. and the owner of more than $400 million in Exxon shares. Exxon did not immediately respond to a request for comment.

This is the latest salvo in Engine No. 1’s campaign against Exxon, which began in December. Unlike previous climate shareholder efforts that focused on getting the company to disclose environmental data or be more ambitious about cutting emissions, Engine No. 1 is now insisting that change will only happen if the board includes leaders with experience in the energy transition. Exxon currently produces virtually no renewable energy, and as Bloomberg Green reported last year the company had previously made long-range plans to expand fossil-fuel production and increase greenhouse gas output.

Until recently, apart from Chairman and Chief Executive Officer Darren Woods, none of the board members sported any expertise even in the oil industry. On Feb. 2, Exxon added Wan Zulkiflee, former head of Malaysian Petroliam Nasional Bhd., to the board.

Since Engine No. 1’s initial letter, Exxon has set a new goal to cut emissions, disclosed for the first time the magnitude of emissions from customers burning fossil fuels, and committed to spend $3 billion on carbon capture and other technologies. In a sign that the activist push might bring additional results, Exxon this month is reportedly considering a climate-minded investor, Jeff Ubben, as a new board member.

“What’s maybe most surprising is that Exxon actually acted off the back of Engine No. 1’s first letter,” said David Doherty, an oil specialist with BloombergNEF.

Engine No. 1 owns less than $50 million in Exxon shares, as of December 31. With support from Calstrs, the activist push makes up just about 0.2% of Exxon’s public holding. But the oil giant has proven newly responsive to investor demands. Exxon shareholders with trillions of dollars in total assets, including BlackRock Inc., Legal & General Group Plc and UBS AG, have joined the broader call for corporations to provide stronger climate disclosures.

Exxon’s moves have coincided with the election of U.S. President Joe Biden, who vowed to up regulations on oil companies and pledged to set the country on the path to net-zero emissions by 2050. That means that nine out of the 10 biggest economies in the world have embraced a goal to become climate neutral. The changes at Exxon also come against the backdrop of a series of investigative reports last year from Bloomberg Green that revealed previously undisclosed emissions data from within Exxon and the stalled development of a major carbon-capture project.

The demand for a net-zero target goes far beyond Exxon’s current climate posture. It’s that goal Engine No. 1 believes Exxon must now set for itself, in order to reach parity with European oil majors. Last year, Occidental Petroleum Corp. became the first large U.S. oil company to establish a plan to become greenhouse-gas neutral by 2050, including emissions from customers using its fuels.

“There’s a highly uneven response to the climate challenge from the oil and gas industry,” said David Victor, professor of international relations at the University of California San Diego. “The European companies are out in front, and the American ones—Exxon in particular—are lagging far behind.”

Engine No. 1 deems Exxon’s responses so far to be insufficient. The company “has now gone from dismissing emissions reduction goals as a ‘beauty competition’ to claiming repeatedly this month that its emissions reductions plans are ‘consistent’ with the Paris Agreement,” the letter reads.

The document then goes on to cite specific flaws that Engine No. 1 has identified in Exxon’s statements and climate plans, including:

While the planet might benefit from Exxon overhauling its climate strategy, Engine No. 1 follows the activist-investor tradition of framing its demands around the protection of shareholder value. “We believe that enhancing the company’s long-term future requires a clean break with the past,” reads the letter.

The pressure might be working already in the favor of investors. Since Engine No. 1’s campaign began, Exxon has outperformed Chevron significantly.