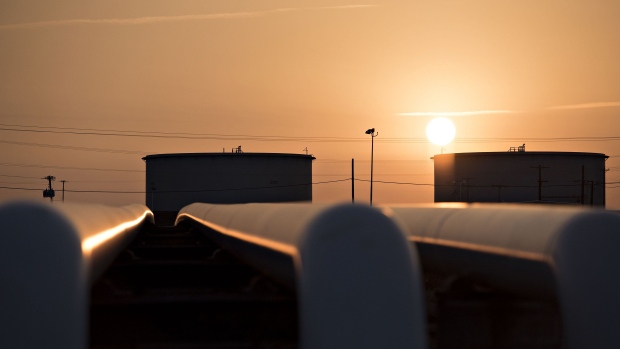 The sun rises beyond oil storage tanks at the Enbridge Inc. Cushing storage terminal in Cushing, Oklahoma. U.S. drillers have idled 58 percent of the oil rigs that were operating in October, according to Baker Hughes Inc. Photographer: Daniel Acker , Bloomberg

(Bloomberg) -- Exxon Mobil Corp.’s worldwide oil and natural gas reserves declined by almost one-third to lowest in the company’s modern history after the pandemic-driven collapse in energy demand and prices.

Exxon counted the equivalent of 15.2 billion barrels of reserves as of Dec. 31, down from 22.44 billion a year earlier, according to a regulatory filing on Wednesday.

Most of the downward revisions involved Exxon’s Canadian oil-sands developments as well as U.S. shale, where it removed 1.5 million barrels from the ledger. The blow to future production potential comes just weeks after Exxon posted its first annual loss in at least four decades.

Exxon shares were little changed at $56.80 in after-hours trading and have advanced 38% this year.