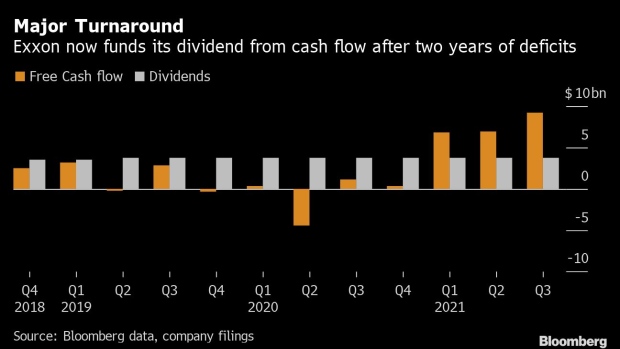 The Esso Fawley Oil Refinery, operated by Exxon Mobil Corp., stands in Fawley, U.K., on Thursday, May 14, 2020. Oils historic plunge below $0 a barrel pummeled portfolios, broke risk models and changed the way the worlds most important commodity is traded. , Bloomberg

Just months after a shocking boardroom coup by an activist investor seeking major changes in the oil giant’s climate strategy, Exxon announced plans Wednesday to reduce greenhouse-gas emissions by 20% by the end of 2030. The goal stands in stark contrast to pledges by BP Plc and Royal Dutch Shell Plc to totally eliminate such pollution by the middle of the century.

Exxon is revamping its environmental assumptions and long-term strategic outlook after hedge fund Engine No. 1 pulled off a sweeping board shakeup earlier this year that saw a quarter of directors replaced. The victory was widely seen as a warning to the fossil-fuels industry that investors will now hold it to account for environmental issues.

Exxon’s new goals appear to seek a balance between climate concerns and the huge petroleum investments that Chief Executive Officer Darren Woods sees as crucial to funding cash flow and dividends. Recasting the company as a friend of the ecosystem may be a tough sell: Exxon ranked last among the oil supermajors on environmental, social and governance scores prior to Wednesday’s announcement, according to S&P Global Inc.

While Exxon has evolved its stance on climate change since the combative tenure of former CEO Lee Raymond around the turn of the century, current management has been reluctant to follow rivals like BP and Shell in pledging to zero out emissions in a matter of decades.

Although Exxon’s new targets fall short of net zero, it’s the first time the company has committed to an explicit reduction in absolute greenhouse-gas emissions. Chevron Corp. outlined a net-zero “aspiration” earlier this year but only pledged to reduce so-called emissions intensity, a controversial measure of pollution per unit of energy.

Focusing on intensity rather than absolute emissions allows drillers to expand oil and natural gas production as well as total emissions associated with that.

The new plan “significantly grows earnings and cash flow, while competitively positioning us for a wide range of future scenarios, including net-zero pathways,” Woods said in a presentation posted on Exxon’s website.

On the financial side, Exxon’s performance has rapidly improved of late after a disastrous 2020, during which the oil giant posted its first annual loss in at least four decades.

But it’s not the only oil driller taking fire from activist investors. Shell is in the midst of a bitter contest with Dan Loeb’s Third Point Capital LLC to keep the explorer intact and plow ahead with plans to invest billions in renewables, carbon capture and other green initiatives.

Exxon shares are up almost 46% this year as higher energy prices and cost cuts swelled cash flow to a level where Exxon can pay back debt and restart share buybacks while still paying $15 billion in dividends annually, the third-largest in the S&P 500 Index.

(Updates with comparison to rival drillers starting in first paragraph)