Exxon Mobil Corp. has been planning to increase annual carbon-dioxide emissions by as much as the output of the entire nation of Greece, an analysis of internal documents reviewed by Bloomberg shows, setting one of the largest corporate emitters against international efforts to slow the pace of warming.

The drive to expand both fossil-fuel production and planet-warming pollution comes at a time when some of Exxon’s rivals, such as BP Plc and Royal Dutch Shell Plc, are moving to curb oil and zero-out emissions. Exxon’s own assessment of its US$210 billion investment strategy shows yearly emissions rising 17 per cent by 2025, according to the internal documents.

The largest U.S. oil producer has never made a commitment to lower oil and gas output or set a date by which it will become carbon neutral, and its near-term plans have been disrupted by fallout from the COVID-19 pandemic. Exxon has also never publicly disclosed its forecasts for its own emissions. 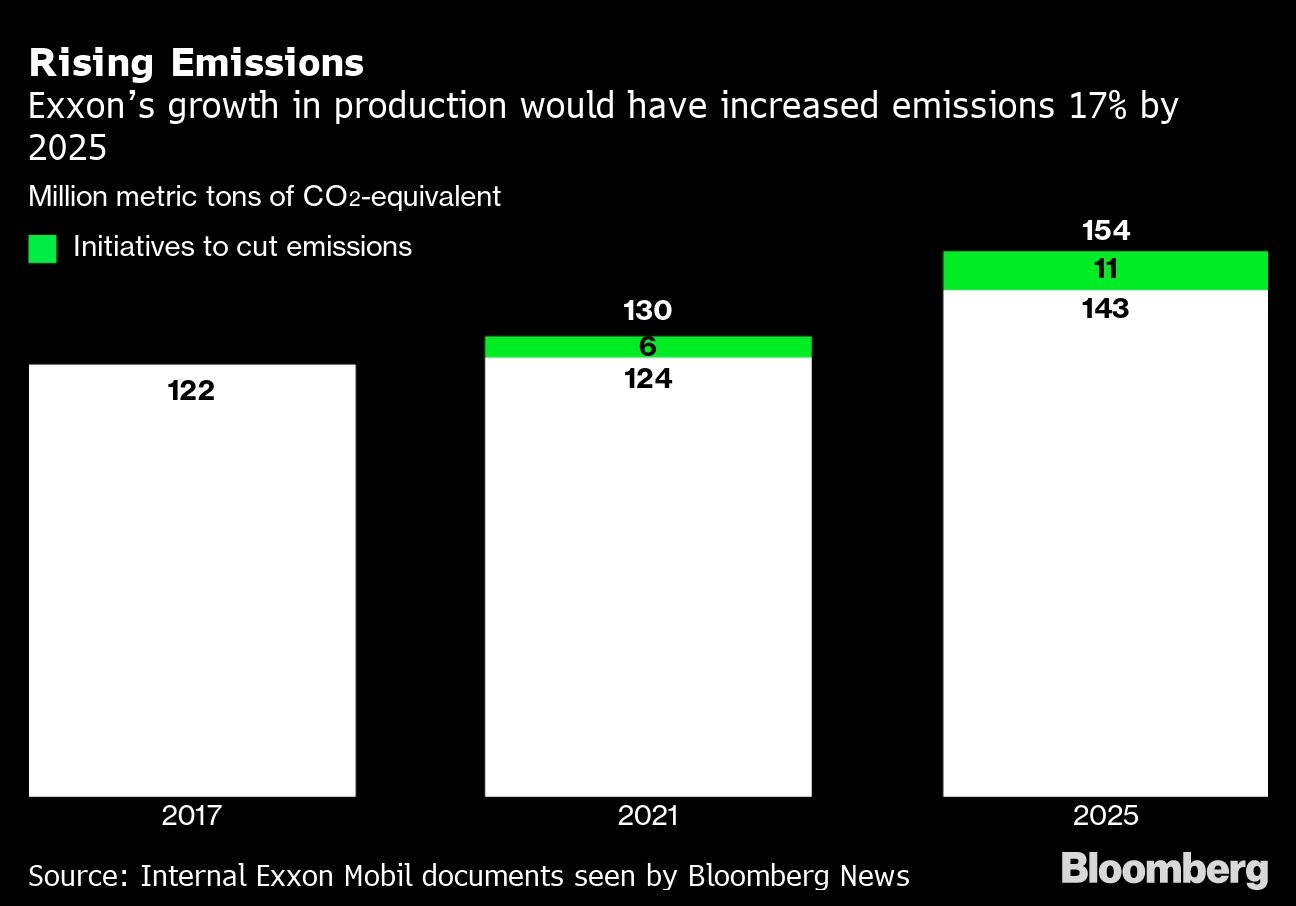 But the planning documents show for the first time that Exxon has carefully assessed the direct emissions it expects from the seven-year investment plan adopted in 2018 by Chief Executive Officer Darren Woods. The additional 21 million metric tons of carbon dioxide per year that would result from ramping up production dwarfs Exxon’s projections for its own efforts to reduce pollution, such as deploying renewable energy and burying some carbon dioxide.

These internal estimates reflect only a small portion of Exxon’s total contribution to climate change. Greenhouse gases from direct operations, such as those measured by Exxon, typically account for a fifth of the total at a large oil company; most emissions come from customers burning fuel in vehicles or other end uses, which the Exxon documents don’t account for.

That means the full climate impact of Exxon’s growth strategy would likely be five times the company’s estimate—or about 100 million tons of additional carbon dioxide—had the company accounted for so-called Scope 3 emissions. If its plans are realized, Exxon would add to the atmosphere the annual emissions of a small, developed nation, or 26 coal-fired power plants.

The emissions projections are “an early assessment that does not include additional mitigation and abatement measures that would have been considered as the next step in the process,” Exxon said in a statement. “The same planning document illustrates how we have been successful in mitigating emissions in the past.”

Exxon often defends its growth plans by citing International Energy Agency estimates that trillions of dollars of new oil and gas investments are needed by 2040 to offset depletion from existing operations, even under a range of climate scenarios. However, experts say a reduction in global oil and production is necessary to limit warming to 1.5 degrees Celsius above pre-industrial levels.

Exxon’s ambitious growth plans, calling for higher cash flow and a doubling of earnings by 2025, are a vestige of pre-pandemic times. The industry has been hard hit by Covid-19, which destroyed demand for oil and sent prices into a tailspin. “As demand returns and capital investments resume,” Exxon added in the statement, “our growth plans will continue to include meaningful emission mitigation efforts.”

The collapse of oil demand forced Exxon to cut its spending budget by a third in April, and its share price is currently hovering near an 18-year low. Exxon was removed from the Dow Jones Industrial Average earlier this year. The company last week warned of a third consecutive quarterly loss, meaning it’s relying on debt to pay capital expenditures and dividends.

As recently as July, however, Exxon indicated that it’s merely delaying many projects to preserve cash during the downturn rather than canceling them. Fulfilling the plan would mean producing an additional 1 million barrels of oil a day. The emissions generated by the extra drilling and refining would increase the company’s greenhouse gas emissions to 143 million tons of CO₂ equivalent per year, the internal documents show.

“Exxon has repeatedly shopped for growth over the last 10 years, and their returns have suffered,” said Andrew Grant, head of oil, gas and mining at Carbon Tracker, a financial think tank. “Exxon is explicit that their business plan is informed by their own business outlook, which assumes continued demand growth for fossil fuels.”

The more than US$30 billion-per-year investment plan was the centerpiece of Exxon’s March 2018 Investor Day. Woods declared an ambition to build a suite of high-quality operations that would produce large volumes of oil and gas for decades into the future, regardless of changes in policy or price. After years of struggling with stagnant production, Woods zeroed in on five key projects: shale oil in the Permian Basin, offshore oil in waters belonging to Guyana and Brazil, and liquefied natural gas in Mozambique and Papua New Guinea.

“It’s the richest set of opportunities since Exxon and Mobil merged,” Woods told investors, a line executives have repeated ever since.

Even though Exxon lags far behind Europe’s biggest oil companies in setting targets to address global warming, it recently stepped up efforts to curb methane, a super-potent greenhouse gas. The company has also joined a voluntary industry effort to lower its “carbon intensity,” producing oil and gas on a cleaner per-barrel basis. “Emissions intensity reduction targets by a company that was setting out to dramatically increase its production won’t result in lower absolute emissions,” said Kathy Mulvey, a campaign director at the Union of Concerned Scientists.

Exxon’s internal projections credit the company with the beneficial impact of two dozen emission-lowering measures, such as projects to capture carbon, reduce methane leaks and flaring, and use renewable energy. Without adjusting for these projects, which are termed “self-help” measures in the planning documents, Exxon’s direct emissions in 2025 would surge to 154 million tons of CO₂ equivalent—a 26% increase from 2017 levels.

These emissions figures represent only a fraction of the total. Exxon doesn’t disclose Scope 3 figures, unlike other big, publicly traded oil producers. A recent effort by Bloomberg Opinion to estimate the total emissions of the world’s largest fossil-fuel producers put Exxon at 528 million metric tons of carbon dioxide equivalent in 2019. CDP, an independent group that tracks and encourages carbon disclosures, estimated Exxon’s total emissions at 577 million metric tons for 2015. Exxon’s most recent public disclosures for its direct emissions, called Scope 1 and Scope 2, recognized only 127 million metric tons in 2018.

Planning documents showing the surge in emissions that would result from the investment strategy were widely circulated in internal Exxon meetings as recently as early this year, before the coronavirus spread beyond China. Unlike earnings targets, Exxon never publicly announced its 2025 emissions goals, leading some employees to question whether the company was committed to reductions. More than a third of Exxon’s self-help measures rely on carbon capture, an expensive process that stores carbon dioxide underground.

Allegations of inadequate disclosures related to the dangers of global warming have become a source of legal trouble for Big Oil. In June, Minnesota sued Exxon, Koch Industries Inc. and the American Petroleum Institute for allegedly withholding critical information about the impact of fossil fuel use on climate change. All told, Exxon and other oil companies are being sued by about a dozen cities, counties and states seeking compensation for consumers and taxpayers over the cost of adapting to climate change. (Exxon denies wrongdoing in the suits, which it says are baseless and politically motivated; at the end of last year, the company won a related case brought by New York’s attorney general.)

The pandemic has accelerated European oil majors’ transition toward cleaner sources of energy, while giving Exxon an opportunity for a different type of strategic reset. So far that has meant cutting headcount and employee benefits, shelving major projects and reducing its global capital expenditure by US$10 billion this year. Exxon’s dividend yield now tops 10%, an indication investors expect the payout to be cut for the first time in decades.

Exxon and its European peers have split over adaptation to a world in which major economies are moving to phase out fossil fuel. The U.S. oil giant has long aligned with the conservative wing of American politics: Woods’s mentor and predecessor, Rex Tillerson, served as President Donald Trump’s first secretary of state, and earlier this year Woods joined fellow energy CEOs at the White House to discuss reopening the U.S. economy. Exxon has benefited from Trump’s policy of “unleashing energy dominance.” But the company also donates to candidates from both parties and rejected some of Trump’s measures, such as rolling back methane regulations.

Whether or not Woods decides, in the wake of the pandemic or a political shift in the U.S., to follow his European peers toward net-zero emissions remains to be seen. But the trend from many of the world’s largest countries and corporations is unmistakable, and it’s not clear that Exxon’s approach to growth reflects these big changes.

Just last month China pledged to be carbon neutral by 2060, a shift that would set into motion a more than 65 per cent drop in its oil consumption and a 75 per cen cut in gas, according to government-affiliated researchers. The EU is aiming to reach neutrality across all greenhouse gases by 2050, which will be partly funded by the Green Deal that invests in electrification of transport and the promotion of clean hydrogen. California announced a new plan to end the sale of gasoline-powered cars by 2035, in a state that alone accounts for one per cent of global oil demand.

“It’s past time for Exxon Mobil to take responsibility for the harmful impacts of its oil and gas products,” said Mulvey of the Union on Concerned Scientists. “The world at large and its own investors would benefit from Exxon redirecting its strategy toward the energy we need in a low-carbon future.”

— With assistance by Hayley Warren and Joe Carroll