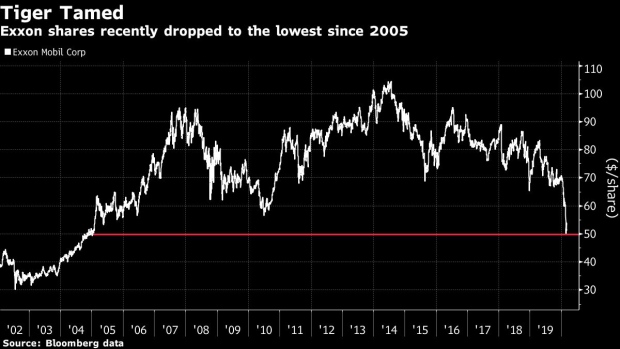 A pumpjack in the Permian Basin near Orla, Texas. Photographer: Daniel Acker/Bloomberg , Bloomberg

(Bloomberg) -- Exxon Mobil Corp. is slowing the pace of its flagship shale project in the Permian Basin, one of the first signs that the oil majors are throttling back on production in response to the recent slump in prices.

The U.S, energy giant said Thursday in a slide presentation that it will operate at a “reduced pace” this year and next compared with its prior outlook. The company sees output from the basin in West Texas and New Mexico at about 360,000 barrels of oil equivalent a day in 2020, but stuck to its long-term plan to almost triple production there by 2024.

Oil prices have slumped in recent weeks as concern mounts over the impact of the coronavirus on global consumption. Goldman Sachs Group Inc. said earlier this week that demand will contract in 2020 for only the fourth time in 40 years. The pressure is particularly acute for Exxon. Its shares have dropped to a 15-year low as it continues to spend heavily on new projects through the downturn as part of a counter-cyclical strategy.

“Today, oversupply is driven by industry investments and some of these growth markets have exceeded demand,” Chief Executive Officer Darren Woods said at the company’s annual investor presentation in New York. “We’ve got a very challenging short-term margin environment which is now being compounded by the growing economic impact of the coronavirus.”

The Permian pullback means this year’s capital spending will be not more than $33 billion, the low end of its previously targeted range for this year. Even so, Exxon said its long-term plans were unchanged, with spending rising to as much as $35 billion a year through 2025.

The oil giant, which is hosting its annual investor presentation in New York, is “leveraging flexibility to pace investments,” it said in the slides.

The scale of Exxon’s spending has meant the oil behemoth has failed to cover its dividend payments with cash flow for eight out of the last 10 quarters, relying on asset sales and borrowing to make up the difference.

Exxon said Thursday its balance sheet has “significant financial capacity” to pay for project spending while growing the dividend. Debt is “available at historically low cost.” Its shares dropped 1.3% to $51.75 at 8:09 a.m. in pre-market trading in New York.

The company’s Permian pullback is another sign that U.S. shale growth may be slowing. West Texas Intermediate crude prices have dipped well below $50 a barrel, a level at which many of the independent operators in the Permian are thought to be losing money.

“The company emphasized it is evaluating the pace of near-term development activities in response to market conditions, and can do so while preserving value,” Exxon said in a separate statement, referring to the Permian.

Exxon, along with Chevron Corp., is making a large bet on the Permian as a source for future production growth. Chevron told investors Tuesday that it sees its Permian output plateauing at 1.2 million barrels a day by the mid-2020s with capital spending of about $4.5 billion a year.

To contact the editor responsible for this story: Simon Casey at scasey4@bloomberg.net