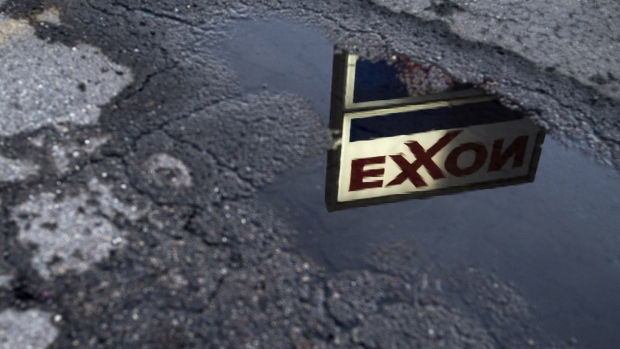 Exxon Mobil Corp. signage is reflected in a puddle at a gas station in Nashport, Ohio, U.S., on Friday, Jan. 26, 2018. , Photographer: Ty Wright/Bloomberg

Exxon hasn’t complied with subpoenas for cash-flow projections reflecting how it used so-called proxy costs to calculate the financial impact on its assets from future regulations tied to climate change, Attorney General Barbara Underwood said in a filing Tuesday in state court in Manhattan.

New York said it wants to know exactly how the proxy cost for greenhouse gas emissions has been used in making investment decisions, corporate planning reviews, reserves estimates and evaluations for more than two dozen assets and projects. The documents are located in a limited number of electronic folders where Exxon "knows this key evidence is stored," the state said.

The company, which in March lost a lawsuit to have the investigation thrown out, didn’t immediately respond to a request for comment.

The proxy cost is supposed to assure investors that future government regulations that may limit the use of fossil fuels are already taken into account in assessing the company’s value. But the state has said Exxon may use two sets of proxy costs, one for public use and one for internal applications, according to the filing.

The state highlighted the issue in June 2017 when it told the court it found "significant evidence" that Exxon may have misled investors about how the proxy cost is applied, contending the company may have vastly exaggerated its use of such calculations. Exxon has denied wrongdoing, arguing that New York was wildly distorting how the company calculates the costs.

To contact the reporter on this story: Erik Larson in New York at elarson4@bloomberg.net