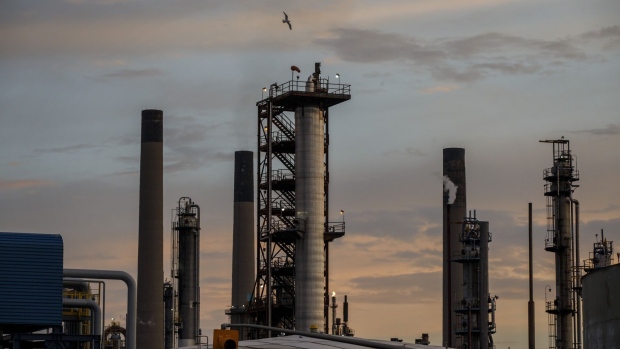 An Imperial Oil Ltd. refinery near the Enbridge Line 5 pipeline in Sarnia, Ontario, Canada, on Tuesday, May 25, 2021. Enbridge Inc. said it will continue to ship crude through its Line 5 pipeline that crosses the Great Lakes, despite Michigan Governor Gretchen Whitmer's order to shut the conduit. , Bloomberg

(Bloomberg) -- Some of Canada’s top oil executives are ramping up their opposition to Prime Minister Justin Trudeau’s goal of cutting emissions from the energy sector by 42% by 2030.

Brad Corson, chief executive officer of Imperial Oil Ltd., told analysts Friday the target is “very aggressive” and “stretches the capability of what is technically and economically feasible.” Imperial is a Calgary-based integrated oil producer that’s controlled by ExxonMobil Corp.

“What I think, collectively as industry, government, society, we need to be very cautious about is ensuring that we bring the right balance to environmental improvements with continued oil supply,” Corson said. The company shares the government’s objective of getting to net-zero emissions by 2050, he added.

Trudeau’s government issued the target in March and followed it with a discussion paper on a potential emissions cap on the energy sector. The latter could be implemented through a tougher carbon-price policy or a cap-and-trade system that allows higher-emitting companies to buy credits from lower-emitting ones.

The 42% objective is larger than the Canadian oil industry’s own proposal to cut emissions by 30% by the end of the decade -- a plan that relies heavily on carbon-capture technology to reduce pollution from the oil sands, which has a higher carbon footprint than many other forms of crude extraction.

“We have a plan and we think it’s one of the few plans out there,” MEG Energy Corp. CEO Derek Evans told analysts. “It’s ambitious at 30%. I don’t know how we get to 42%. I think that personally, in my humble opinion, is almost unrealistic.”

Environment Minister Steven Guilbeault’s office did not immediately respond to a request for comment.

The desire for emissions reductions must be balanced with the need to supply fuel to the world during a time of high prices, Cenovus Energy Inc. CEO Alex Pourbaix said in an investor call Thursday.

“Ultimately, the risk could be a cut in production from Canada at a time when these resources are just incredibly, desperately needed worldwide,” he said.