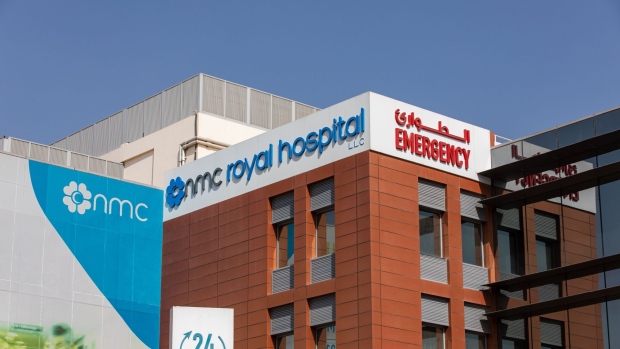 An emergency department sign sits on display outside the NMC Royal Hospital, operated by NMC Health Plc, in Dubai, United Arab Emirates, on Sunday, March 1, 2020. Troubled NMC Health Plc, the largest private health-care provider in the United Arab Emirates, asked lenders for an informal standstill on its debt as Dubai weighs an injection of capital to safeguard the emirate’s reputation among global investors. , Bloomberg

(Bloomberg) -- Ernst & Young faces accusations it “actively concealed” a six-year fraud from investors in a fresh lawsuit over its auditing work for the troubled NMC Health.

The hospital operator’s founder, Bavaguthu Raghuram Shetty, said the accounting giant enjoyed a “deep and cozy” relationship with executives at the troubled firm, alleging that the auditors turned a blind eye to thousands of suspicious transactions. Shetty is seeking $7 billion from the lawsuit.

The Indian entrepreneur filed a suit in New York last week, naming Ernst & Young as a co-conspirator in the fraud alongside former executives, and said investors lost more than $10 billion.

“EY’s misconduct was not one of professional negligence, but rather EY actively and intentionally conspired with the defendants to conceal their fraudulent conduct,” Shetty’s lawyer said in the court filings.

The allegations of fictitious invoices and inflated financial health between 2013 and 2019 are the most detailed yet from Shetty, who’s separately fighting claims from creditors following NMC’s collapse in April last year.

The firm was put into administration in April last year by a London court as the depths of the health-care provider’s troubles emerged. Shares of the company plunged at the end of 2019 before falling further amid allegations of fraud.

Lawyers for Shetty declined to comment beyond the suit.

The latest suit piles yet more legal and regulatory pressure on Ernst & Young, which is now preparing to defend multiple suits over the quality of its audit.

“We believe this case is without merit and we intend to defend it vigorously,” Ernst & Young said in a statement on the U.S. suit.

Shetty, who was the second-largest shareholder in NMC, is seeking around $7 billion in the New York lawsuit. He has pursued his own investigation as he insists he was a victim rather than the perpetrator of the fraud. He’s facing a suit from NMC’s main creditor alleging that he oversaw the fraudulent transactions.

He’s now turned his ire on the auditor it went from being a “pliable auditor that performed soft audits” to an “active co-conspirator.”

Ernst & Young, which audited NMC as well as other linked companies, never questioned financial figures and proceeded to rubber stamp the audit certificates, Shetty said. Any arms-length review would have spotted red flags, including thousands of transactions shuttled between group companies, he said.

On one occasion, the auditors certified account balances at a group company without receiving the corresponding bank statements, according to the claim.

On another, Ernst & Young was sent spreadsheets with sales figures for the entirety of 2019, even though the document was prepared in September of that year.

The former executives forged Shetty’s signature on 127 personal guarantees tied to some $4.5 billion in loans, he said. Lenders are now seeking repayment on those same loans, he said.

The former executives deny wrongdoing, a London judge said in a ruling on a separate case.

The New York suit comes as the accounting firm faces a separate legal claim brought by NMC’s administrators Alvarez & Marsal in London. The auditor is also under investigation by the U.K. accounting watchdog over NMC’s 2018 financial statements.

(Updates with damages sought in the second paragraph)