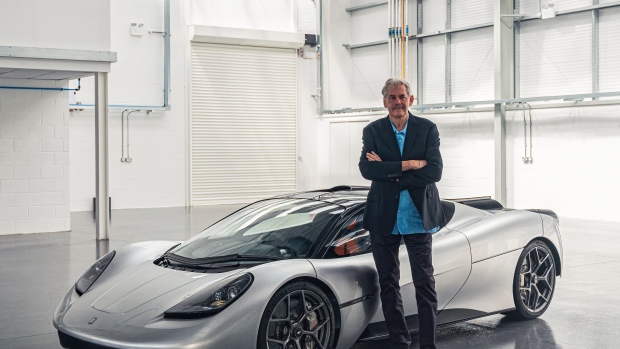 Gordon Murray designed the most expensive car ever made, the McLaren F1, which requires US$20 million to purchase when one is offered for sale — which is almost never.

After that and 85 other supercars for employers that have ranged from Brabham to Mercedes-Benz, the mustachioed 74-year-old South African expat has unveiled the production version of the first car to bear his name.

The Gordon Murray Automotive T.50 is a US$3 million coupe with a carbon-fiber body and a rear fan as big as a turbine. Its naturally aspirated 650bhp, 3.9-liter V12 engine will likely be the last non-electric version of its kind to be used in a car of this caliber. Production remains at full-speed ahead, regardless of the pandemic, Murray says.

“If the car had already been in production, we would have obviously had a problem,” he says on the phone from one of his homes, this one “out in the sticks” in England. “But it just so happened [that] when we had lockdown back in April, we were in the middle of just signing off all the drawings for production, which is something that we can easily do from home.”

Supercar fans have had plenty of time to drool over their prospects of getting one since Murray showed an initial ballpoint sketch of the project two years ago. A show-only shell of a concept was released late last year. Still, two-thirds of the 100 cars to be made are spoken for, and half of those buyers have paid both the first and second of the three monetary payment installments required. (The last installment will occur when the car is delivered, scheduled for 2022.)

Ostensibly, such buyers come to the rear-mid engine, rear-wheel-drive vehicle for the kind of supernatural driving experience heretofore only experienced by those who either race Grand Prix cars professionally or who own the F1. Its sheer feather weight sets it apart: At 2,173 pounds, the T.50 weighs a third of other supercars.

Murray says that he avoided the “weight-gain spiral” that can result from chasing top speeds and the highest power output. Instead, he benchmarked the lowest possible weight for every component in the car, down to individual nuts and bolts. The T.50’s fully carbon fiber monocoque and body panels total less than 330 pounds; the combined weight of three carbon-fiber seats is a mere 28 pounds.

Murray says he designed the T.50 to be one better than the F1. “We are in the perfect position of knowing what makes the F1 driving experience so good and what makes it bad, actually, because there are a few things wrong with the F1,” Murray says. “So this is better in every way because of modern technology and materials. And it’s lighter and the engine is better, so the driving experience is better, and you don’t have the massive insurance bill and the worry that something is going to go wrong.”

Customers are also, no doubt, buying into the myth that has enfolded Murray like a deep ocean fog rolling onto the coastline. A close friend of the late George Harrison, Murray is a true renaissance man: He paints extensively and designs houses in rural France and Scotland. Named Commander of the Most Excellent Order of the British Empire (CBE) last year, he collects vintage T-shirts, with at least 1,000 stored in one of his bars in an English country house.

Brazilian superstar Ayrton Senna was driving Murray-designed cars during his dominant, glamorous F1 years. “Gordon is like a god to everybody,” says David Gooding, founder of Gooding & Co. auction house.

The T.50 comes with dihedral doors and seating for three, with the driver’s seat front and center while the two passengers sit slightly behind it. Interior components are made from solid aluminum, the accelerator pedal crafted from titanium. There are neither touchscreens nor stalk controls inside, as in the F8 Spider and other Ferraris. Instead, the indicators are operated by thumb-buttons on the steering wheel’s horizontal spokes.

Adequate ground clearance in both front and back helps navigate driveways and sidewalks. Comparatively speaking, there is ample storage space: One space above each passenger’s footrest, another under each passenger’s seat, plus one behind the driver’s headrest. Set in the left and right rear haunches of the car are vertical-load luggage compartments, each with around 90 liters of capacity, enough to fit a carry-on bag. These considerations are often overlooked in such supercar brands as Pagani and McLaren.

“I’ve designed this car to be used every day,” says Murray in his typically understated English way.

He has personally met each buyer and says they come from all over the world, with the hot spots centered in Japan, Europe, the U.K., the U.S., and the Middle East. Most, he adds, are under the age of 45—an astoundingly youthful group, considering the fact that the average Rolls-Royce buyer is 50 and the average age of luxury car buyers is several years older.

During the specification process, each customer will have a personalized seat fitting, a steering wheel height-and-reach adjustment, and a fine-tuning of the pedal-box setup. Porsche specialist Bruce Canepa will service the U.S.-based T.50 cars out of his shop in Northern California; Murray has a service network in the U.K., Japan, and Abu Dhabi as well. “Flying technicians” like those used at Lamborghini will also travel to farther-flung T.50 owners to service them with maintenance and repairs at home. Murray will personally hand over each customized car when it is completed.

“The T.50 buyers fit the F1 owner profile,” Murray says. “They’re people who appreciate driving the car and using the car. They all tell me exactly the same thing: ‘When I was a teenager, the poster on the wall was the F1. I started a business; 10 years later, the business was successful. F1s — you can’t really find one anymore, so this is my McLaren F1.’”