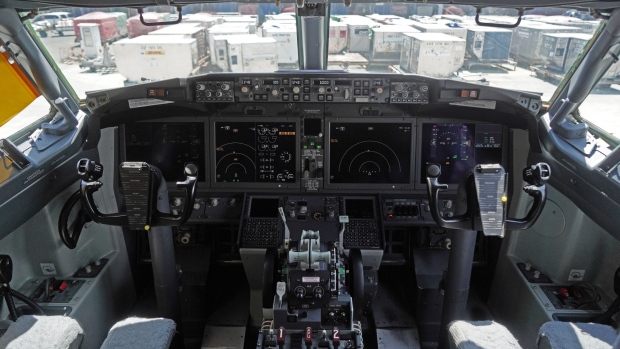 The cockpit of a grounded Lion Air Boeing Co. 737 Max 8 aircraft is seen at terminal 1 of Soekarno-Hatta International Airport in Cenkareng, Indonesia, on Tuesday, March 15, 2019. Sunday’s loss of an Ethiopian Airlines Boeing 737, in which 157 people died, bore similarities to the Oct. 29 crash of another Boeing 737 Max plane, operated by Indonesia’s Lion Air, stoking concern that a feature meant to make the upgraded Max safer than earlier planes has actually made it harder to fly. , Dimas Ardian/Bloomberg

A board of pilot experts appointed by U.S. aviation regulators has reviewed Boeing Co.’s proposed software fix for the grounded 737 Max aircraft and concluded that pilots won’t need additional simulator training once the plane is returned to service.

The report by a Federal Aviation Administration Flight Standardization Board is an important first step in reviewing the still-unfinished upgrade to the 737 Max family of aircraft. It was posted on the FAA’s website and the public has until April 30 to make comments.

The proposal calls for stepped up training on the anti-stall system called MCAS that is linked to two fatal crashes, but stops short of requiring costly simulator training that could complicate the plane’s return to service.

Boeing’s finalized software upgrade hasn’t been sent to FAA yet for approval and isn’t expected for weeks.

Boeing’s best-selling jet has been grounded since March 13, three days after the second fatal accident within five months that killed a total of 346 people. In both cases, a safety system added to the Max models activated during a malfunction, causing the planes’ noses to lower and confusing pilots.

The Chicago-based planemaker is devising a software fix to make the system less aggressive and to prevent it from making the repeated nose-down commands seen in the accidents.

The Flight Standardization Board is made up of FAA officials as well as technical experts from outside the agency. It establishes requirements for pilot training on aircraft models and may be consulted after accidents, according to FAA documents.