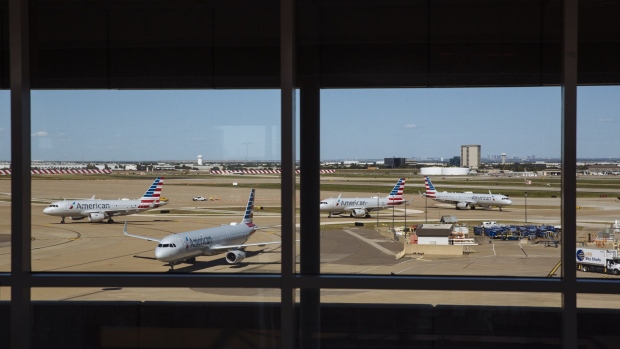 American Airlines planes sit on the tarmac at Dallas/Fort Worth International Airport (DFW) in Dallas, Texas, U.S., on Monday, Sept. 28, 2020. Airline passenger numbers in the U.S. totaled 797,699 on Sept. 28, compared with 2.37 million the same weekday a year earlier, according to the Transportation Security Administration. Photographer: Angus Mordant/Bloomberg , Bloomberg

(Bloomberg) -- Flights into the Dallas area are being forced to take older, cumbersome routes and a runway at Dallas-Fort Worth International Airport was temporarily closed after aviation authorities said GPS signals there aren’t reliable.

The Federal Aviation Administration said in an emailed statement Tuesday it’s investigating the possible jamming of the global-positioning system that aircraft increasingly use to guide them on more efficient routes and to runways. So far, the agency has found “no evidence of intentional interference,” it said.

American Airlines Group Inc., the primary carrier at DFW, said the GPS issue is not affecting its operations. Southwest Airlines Co., which flies from nearby Love Field, said it also isn’t experiencing any disruptions. The FAA reopened the closed runway earlier on Tuesday. A representative for DFW did not reply immediately to a request for comment.

The GPS problem -- despite the lack of impact -- highlights the risk of widespread reliance on the weak GPS radio signals from space used for everything from timing stock trades to guiding jetliners.

The FAA occasionally warns pilots in advance of military testing that may degrade the GPS signals and pilots sometimes report short-lived problems, but the interference in Dallas is atypical, said Dan Streufert, founder of the flight-tracking website ADSBexchange.com.

“In the US, it’s very unusual to see this without a prior notice,” Streufert said in an interview.

ADSBExchange.com monitors aircraft data streams that indicate the accuracy of the GPS signals they are receiving and the website began seeing problems around Dallas on Monday, he said.

The military has told the FAA it isn’t conducting any operations that would interfere with GPS in that area, said a person familiar with the situation who wasn’t authorized to speak publicly about it.

“GPS jamming has always been a risk area,” said John Hansman, an aerospace professor at the Massachusetts Institute of Technology. “It’s not that difficult or expensive technically to jam GPS. Which is why we don’t use GPS as the only navigation source.”

The primary way FAA’s air-traffic system tracks planes is based on GPS, but older radars and radio-direction beacons have remained in place as backups.

As a result, a GPS failure would create less efficient routes and a higher workload for controllers, but wouldn’t necessarily threaten safety or halt flights, Hansman said.

(Updates with re-opening of DFW airport runway in third paragraph.)