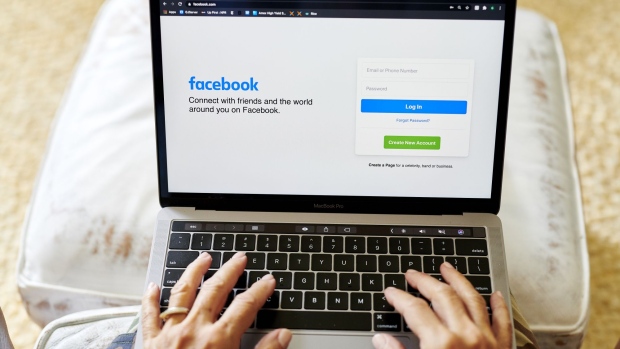 The website home screen for Facebook is displayed on a laptop computer in an arranged photograph taken in Little Falls, New Jersey, U.S., on Thursday, Oct. 8, 2020. Facebook Inc. is tightening its rules on content concerning the U.S. presidential election next month, including instituting a temporary ban on political ads when voting ends, as it braces for a contentious night that may not end with a definitive winner. Photographer: Gabby Jones/Bloomberg , Bloomberg

(Bloomberg) -- Facebook parent Meta Platforms Inc. will soon ask some users for more direct feedback on what they like to see in their feed — and what they don’t — as part of a broader effort to compete with TikTok and show people posts from users they don’t follow.

Users will soon see “show more” and “show less” buttons on posts that appear in their feed, giving them a more direct way to tell the company what they’re interested in. Facebook will use that feedback to temporarily alter the kinds of content  people see as it works to improve “discovery” across the company’s apps and surface new posts and videos to people from others they don’t already follow.

Meta already personalizes user feeds on Facebook and Instagram by using a number of signals, including Likes and follows, but the impact of the new “show more” and “show less” buttons is meant to be both direct and temporary. Using the buttons will likely impact the algorithm for 30 to 60 days, and help dictate the kind of accounts that show up in feeds, said Tom Alison, the head of Facebook’s core app.

“We are looking at it as a signal you are giving us that is a little more time-bound than” liking a post, Alison said, adding that it’s meant to tell Facebook “how you feel about content in the moment.”

Chief Executive Officer Mark Zuckerberg has said that improving “discovery” is a key focus for Meta. It’s considered a key strength of TikTok’s, and Meta has spent a lot of time and resources trying to build a competing short-form video product called Reels.

The “show more” and “show less” options will only appear on some posts, but they will also work on ads, Alison said. “It’s not designed” for ads, he admitted, “but you can apply these controls to ads.”

“This is all about delivering a relevant experience,” he added.