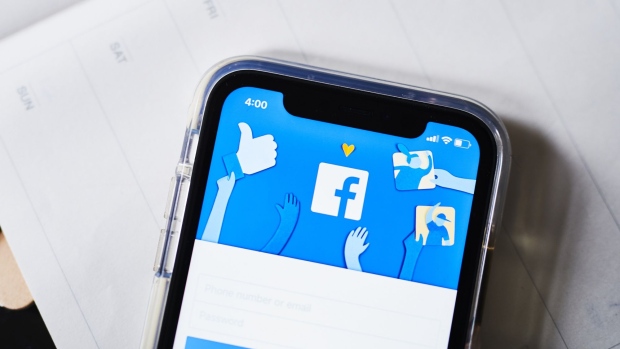 The Facebook Inc. website is displayed on an Apple Inc. iPhone in this arranged photograph taken in the Brooklyn borough of New York, U.S., on Monday, April 22, 2019. As Facebook Inc. prepares to report first-quarter results Wednesday, analysts are confident that the social-media company has moved past negative headlines that dogged the stock throughout the second half of 2018 and is positioned to monetize its massive user base in new ways. Photographer: Gabby Jones/Bloomberg , Bloomberg

(Bloomberg) -- Facebook Inc. banned the violent faction of the so-called “boogaloo” movement -- an anti-government group who believe in a coming civil war -- amid mounting pressure from the private sector and lawmakers to take a more aggressive stance on hate speech as protests over racial inequality have swept the country.

“Today we are designating a violent U.S.-based anti-government network as a dangerous organization and banning it from our platform,” Facebook said in a blog post published Tuesday, as hundreds of accounts, groups and pages affiliated with the boogaloo movement were removed from Facebook and Instagram.

Members of the movement, which Facebook described as encompassing “a range of anti-government activists who generally believe civil conflict in the U.S. is inevitable,” have recently been identified by government officials as “those responsible for several attacks over the past few months,” the post said. “These acts of real-world violence and our investigations into them are what led us to identify and designate this distinct network.”

On Monday, an Air Force sergeant who prosecutors have connected to the movement, Steven Carrillo, was indicted for allegedly killing a federal security guard in Oakland and later ambushing a Santa Cruz County sheriff’s deputy, according to the San Francisco Chronicle.

Facebook’s announcement coincides with a wide-ranging advertiser boycott, in which hundreds of marketers, including well-known brands like Starbucks Corp. and Unilever, have sworn off Facebook advertising for the month of July in protest of the company’s policies. Organizers of the boycott have specifically called out “hate speech” as an area where Facebook needs to better police its services.

The social media giant has also come under increasing criticism by lawmakers, who are pressuring the platform to take more active responsibility for problematic content and disinformation. In a Tuesday letter, three U.S. Senators, Mark Warner, Mazie Hirono and Bob Menendez, all of them Democrats, wrote to Facebook Chief Executive Officer Mark Zuckerberg that the company’s “failure to address the hate spreading on its platform reveals significant gaps between Facebook’s professed commitment to racial justice and the company’s actions and business interests.”

The boogaloo movement, which Facebook dates back to 2012, contains internal divisions, including over “the goal of a civil conflict, racism and anti-Semitism, and whether to instigate violent conflict or be prepared to react when it occurs,” according to the blog post. Facebook banned the part of the movement that “actively seeks to commit violence” rather than the “loosely affiliated movement” as a whole, according to the post.

In the first three months of the year, Facebook removed 6 million pieces of terrorist content -- including posts by white supremacists -- and 4 million pieces of content tied to hate groups, according to a Facebook representative who spoke on a call with reporters under the condition of anonymity due to safety concerns. Even so, the platform remains concerned about the other white supremacist content that it hasn’t yet found, the person said.