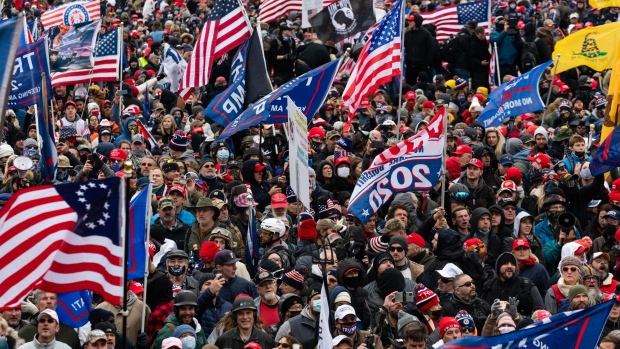 Demonstrators swarm the U.S. Capitol building during a protest in Washington, D.C., U.S., on Wednesday, Jan. 6, 2021. The U.S. Capitol was placed under lockdown and Vice President Mike Pence left the floor of Congress as hundreds of Demonstrators swarmed past barricades surrounding the building where lawmakers were debating Joe Biden's victory in the Electoral College. Photographer: Eric Lee/Bloomberg , Bloomberg

Three major companies are suspending donations and another is seeking a refund from a Republican attorneys general group after an offshoot participated in last week’s march on the U.S. Capitol that turned into a violent raid, a newsletter reported.

Facebook Inc., Lyft Inc., and DoorDash Inc. are suspending their contributions to the Republican Attorneys General Association, the Popular Information newsletter said. The University of Phoenix, which donated over US$50,000 to the group in 2020, is demanding its money back, the report said.

The newsletter from Judd Legum said it contacted 63 corporations that made large donations to the association last year and asked if they would continue to support the group in light of recent events. Several firms said they were reviewing their contributions or expressed concerns about RAGA’s activities, without saying if they would continue making donations.

Legum’s newsletter broke news earlier this month by tracking down firms that suspended donations to members of Congress who sought to block the certification of Joe Biden’s presidential election victory.

RAGA said in a statement Monday that Executive Director Adam Piper was stepping down, without offering an explanation.

Piper had also worked for RAGA’s policy group, according to the Rule of Law Defense Fund, which was listed on a now-deleted web page as a participant in the “March to Save America” gathering last week in Washington that ended up with a deadly attack on the Capitol.

The group’s link to the event was first reported on Jan. 7 by the watchdog group Documented, which tracks the influence of corporate money. Piper denied that claim in a statement Friday.