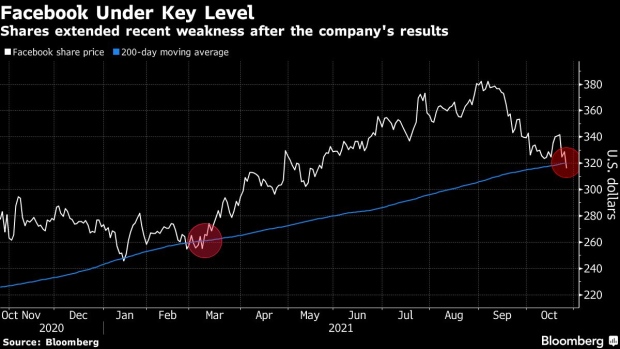 (Bloomberg) -- Facebook Inc. shares tumbled on Tuesday, as a disappointing forecast put the social-media company on track to close below a key technical level for the first time in months.

The stock slid as much as 5.8% to $309.60, falling to its lowest since May. The decline erased more than $62 billion in market value and put shares below their 200-day moving average of $320.19. Should the stock close below this level, that would mark the first time it has done so since March. The stock’s 10-day historical volatility rose to 47.52, its highest since May.

With the day’s decline, Facebook is down more than 18% off a peak hit in early September, though it remains up about 14% for 2021.

In its results, Facebook reported revenue that missed expectations and gave a revenue forecast that was below the consensus. Despite the recent weakness in the stock, Wall Street analysts remain broadly positive on the company, citing its long-term prospects and valuation.