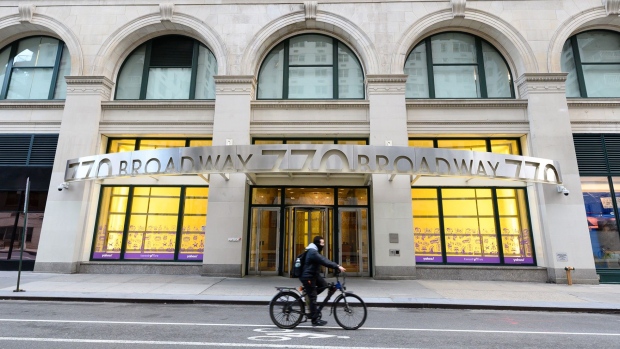 (Bloomberg) -- Facebook Inc. wants to gobble up more office space in Manhattan, even as it delays its return-to-office plans.

The Menlo Park, California-based company already has a large presence in New York, and last year signed a massive lease at the redeveloped Farley Building, a former post office across from Pennsylvania Station.

Still, Facebook is looking to take advantage of a New York office market flooded with available space during the pandemic.

“As our New York tech and engineering teams play a central role in the development of several of Facebook’s global products and technologies, we are exploring several space solutions that will support the future needs of our workforce,” Jamila Reeves, a representative for the company, said in a statement.

Facebook has explored taking roughly 300,000 square feet (28,000 square meters) of additional space at 770 Broadway, a building near Astor Place where it currently has offices, according to a person familiar with the matter, who asked not to be named because the matter is private.

The social media company, which also has offices at Hudson Yards, isn’t alone among technology firms looking for more space in New York. Bloomberg reported last month that Amazon was in talks to take additional space in Manhattan.

In contrast to Wall Street banks, tech giants have been slower to bring workers back into the office. Facebook has delayed its return to office until next year amid the spread of the delta variant. Its New York offices are currently open with capacity limits.