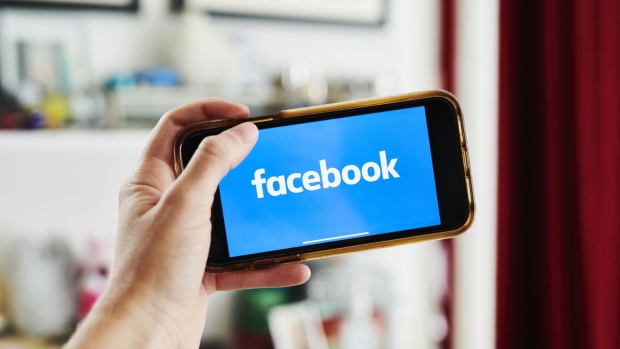 Facebook Inc. signage is displayed on a smartphone in an arranged photograph taken in the Brooklyn Borough of New York, U.S., on Friday, July 24, 2020. Facebook Inc. is scheduled to release earnings figures on July 29. Photographer: Gabby Jones/Bloomberg , Bloomberg

Facebook Inc. will push users more aggressively to join groups on the social network while simultaneously trying to fight the misinformation and conspiracy theories that tend to thrive in those intimate and influential discussion communities.

The company will start putting posts from public groups in users’ feeds even if they aren’t a member of those communities. The move is part of an effort to get people with similar interests to interact, even if they don’t know one another in real life, said Fidji Simo, the head of Facebook’s core social network.

While Facebook’s new effort unveiled Thursday may help people find a supportive community, the attention could also accelerate users’ exposure to questionable information sources. Groups, particularly those that are by-invitation only, have become a common tool for misinformation and conspiracy theories.

Facebook is trying to combat the problems by giving group administrators more power to block specific types of content and prevent certain users from posting.

“The reason we are pushing on making group content more discoverable now is because we are launching that in conjunction with” these new tools for administrators, Simo said.

Facebook, which started 16 years ago, needs to give users more reasons to visit in order to accelerate growth and influence. A few years ago, the company started pushing the Groups product, quickly developing it into one of the network’s most popular features. Simo said 1.8 billion monthly users are now part of a group. As the network has achieved immense scale -- it has more than three billion users across its products -- Chief Executive Officer Mark Zuckerberg has encouraged people toward more intimate places on the service, like private messaging, to give users more reasons to share.

But that intimacy has also made Groups a place where misinformation flourishes, sometimes accelerated through the recommendations Facebook makes to users. Simo said the company proactively searches public and private groups for content that violate its terms of service. She also said the network doesn’t recommend groups to people if those communities are linked to certain controversial topics, like health information or conspiracy theories.

Group founders are getting more creative to hide their true focus and escape enforcement, according to a review by Bloomberg. While Facebook banned hundreds of groups focused on the conspiracy QAnon in August, for example, more still exist and are changing their group descriptions to avoid detection by the company’s automated software. Some are changing the “Q” in QAnon to the word “cue,” while others are changing the “Q” to the number “17.”

Facebook said not all QAnon groups violate the company’s rules, and only groups that discuss violence or other prohibited content are actually removed. But the conspiracy’s followers -- who believe U.S. President Donald Trump is saving America from a cabal of high-profile child molesters -- have used Facebook groups to increase their numbers and spread the conspiracy to millions of people. Private groups, especially, have also been a hotbed for people who dangerously discourage the vaccination of children.

Simo said the company’s top priority is keeping users safe. A recent report in The Verge found that despite that pledge, Simo measures the Facebook app’s success based on how much attention it draws from users, suggesting that engagement data was more important than user safety.

Simo pushed back on that suggestion in an interview, and said people on Facebook don’t want to use a product that makes them feel unsafe. The company uses a variety of metrics to measure group “health,” including the prevalence of content that violates Facebook policies, and “driving bad content down.”

“We wouldn’t care at all about great engagement in groups if groups are fundamentally not safe,” Simo said. “Certainly you can have no safety issues if you have no engagement.”

One of the ways Facebook hopes to encourage more people to use groups is by helping administrators make money. Facebook already lets groups charge a subscription fee to users, and now will let administrators run branded content inside their communities. The company doesn’t currently run ads inside groups, though that’s something it may consider, Simo said.