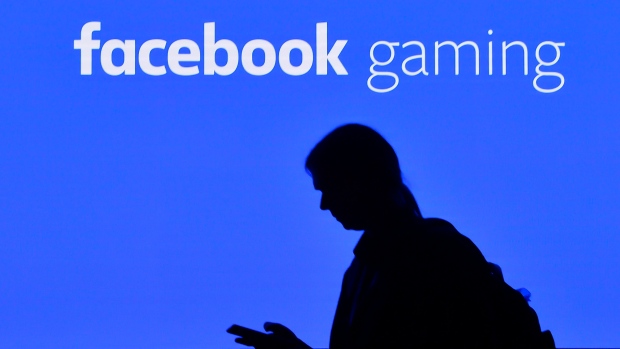 A man watches his phone at the facebook gaming stand at the Gamescom in Cologne, Germany, Tuesday, Aug. 20, 2019. , The Associated Press

In a warning shot to Amazon.com Inc.’s Twitch -- long the leader among sites where people watch others play games -- Facebook Gaming grew the fastest among such platforms in streamed hours watched in December.

The Facebook Inc. channel’s market share rose to 8.5 per cent of all streaming hours watched last month, up from 3.1 per cent in December of 2018, according to a report from StreamElements and Arsenal.gg. Alphabet Inc.’s YouTube Gaming and Microsoft Corp.’s Mixer increased their shares slightly as well. While it lost market share, Twitch increased its total hours watched last month, as its nongaming content gained momentum, according to the report.

“Facebook will become a meaningful contender in this category by 2021,” said Doron Nir, chief executive officer of StreamElements, which provides tools to streamers. “They have a shot at becoming No. 1 or No. 2 in this category in a few years.”

Twitch’s share of hours watched declined to 61 per cent from 67.1 per cent in December 2018, the report found.

Also last month, a nongame category became the most popular by hours watched on Twitch for the first time. Just Chatting, which contains contents ranging from social commentary to exercise videos, was more popular than content related to games like League of Legends and Fortnite, according to the report.

“It’s really more about a rise of just nongaming content,” Nir said. “What it means for live streaming in general is we are just seeing the tip of the iceberg. There’s a huge amount of additional categories that are going to emerge and grow. Just Chatting is really the most basic form.”