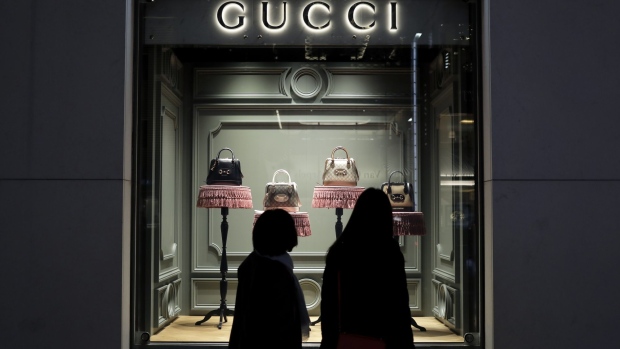 Pedestrians look at Guccio Gucci SpA handbags in the window display of a department store at night in the Ginza district of Tokyo, Japan, on Thursday, Nov. 12, 2020. , Bloomberg

Facebook Inc. and Gucci filed their first joint lawsuit against an alleged online counterfeiter as the web giant and luxury brand move to crack down on the fraudulent practice.

Facebook and Kering SA’s Italian fashion brand filed the suit against an individual for breach-of-contract, claiming violations of the social media platform’s terms and the infringement of Gucci’s intellectual property rights, they said in a statement. The suit was filed in federal court in northern California.

The individual, who isn’t identified in the statement, used various Facebook and Instagram accounts to dodge prior enforcement actions by the platforms, and continues to promote her business selling fake Gucci goods, the companies alleged.

Customers “deserve to be able to shop for authentic Gucci products without fear of being deceived,” they said.

Luxury goods makers have long struggled to stamp out counterfeiting, with billions of dollars worth of revenue at stake. In the statement, Facebook said it took down more than one million pieces of content from its own and Instagram’s networks in the first half of last year, based on thousands of reports of counterfeit content from brands including Gucci.