Croxon on Facebook: 'Fish stinks from the head down,' Zuckerberg should step down

When Mark S. Luckie wrote a lengthy internal memo, explaining how difficult it was to be black and employed at Facebook Inc. (FB.O), he expected some sort of change -- or at least a reply from the CEO or COO.

“Facebook’s disenfranchisement of black people on the platform mirrors the marginalization of its black employees,” he wrote. “Racial discrimination at Facebook is real.”

Instead, he got a private message from Ime Archibong, one of the highest-level black employees at Facebook, saying Luckie’s experience may not be representative, and taking it personally.

“I guess I’m just confused and pretty hurt because I voted for your hire, was inspired by your willingness to strengthen the community, and that post just seems so out of character,” Archibong wrote.

Frustrated, Luckie went public. He posted both his memo and Archibong’s response on social media Tuesday, feeling that it would be impossible to change Facebook without more pressure. Now, he said, he’s leaving the technology industry and moving to Atlanta.

“I’m tired,” he said in an interview. “I’ve been hired at these companies because I bring experience and perspective and productivity and insight into these underrepresented communities. But every time I get in, there’s no line for me to actually do what I want to get done.”

In the post, Luckie, who worked as a Partnerships Manager for a year, described the ways in which the social network excludes black users and employees. 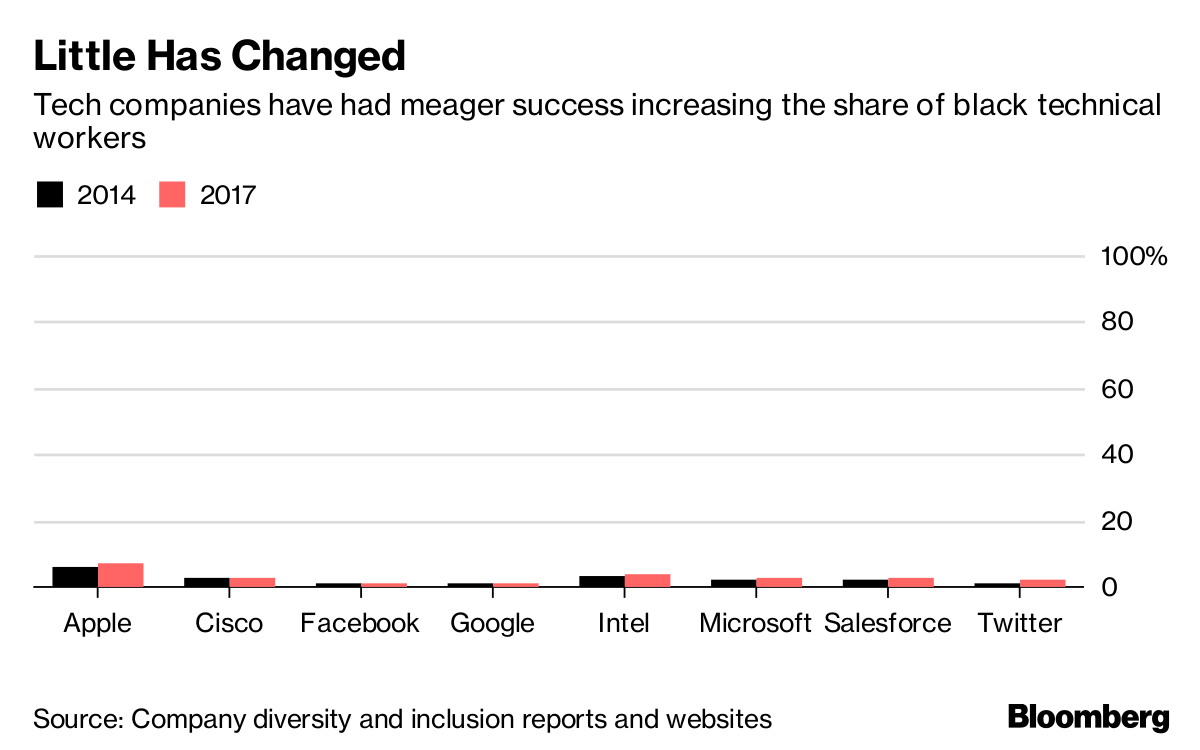 Current and former workers at big technology companies are increasingly willing to speak out publicly about perceived missteps by their employers and unjust policies. This has gathered steam in recent months as the industry has been accused of abusing its power. Google staffers signed an open letter on Tuesday urging the company to scrap plans for a Chinese search product that would censor results.

Facebook’s top executives didn’t respond to Luckie, but they have had to handle other workforce blowups this year. Employees were frustrated when a public policy executive made a show of support for Brett Kavanaugh in a contentious Senate hearing on Kavanaugh’s Supreme Court nomination. And in a recent Q&A with company leadership, workers quizzed management about a report that the company paid a firm to conduct opposition research on billionaire George Soros.

“We’ve been working diligently to increase the range of perspectives among those who build our products and serve the people who use them throughout the world," Facebook spokesman Anthony Harrison said. "The growth in representation of people from more diverse groups, working in many different functions across the company, is a key driver of our ability to succeed."

Archibong later posted on Twitter, too: “We all have diverse experiences and I can’t speak for your personal experience at FB -- but your experience is not my experience and not that of many others here.”

Four per cent of Facebook’s U.S. workforce is black, the company said in July, up from two per cent in 2014. In technical roles, that drops to 1 per cent. Facebook published its first workplace diversity report in 2014 alongside a post that said the company was “absolutely committed to achieving greater diversity” in its workforce and across the industry.

In his post, Luckie said he felt like an outsider on Facebook’s campus, an experience that included racial profiling by security guards. “Many black employees can recount stories of being aggressively accosted by campus security beyond what was necessary,” he writes. “On a personal note, at least two or three times a day, every day, a colleague at MPK [Facebook headquarters in Menlo Park] will look directly at me and tap or hold their wallet or shove their hands down their pocket to clutch it tightly until I pass.”

Luckie criticized Facebook human resources for failing to take action when employees complained of mistreatment, which contributed to low morale among some black employees. His essay reflects the bind that Facebook’s black employees have sometimes felt: Excitement about the job tempered with feelings of isolation. “To feel like an oddity at your own place of employment because of the colour of your skin while passing posters reminding you to be your authentic self feels in itself inauthentic,” he wrote.

"We want to fully support all employees when there are issues reported and when there may be micro-behaviours that add up," Facebook’s spokesman also said on Tuesday. "We are going to keep doing all we can to be a truly inclusive company."

Facebook’s issues with race extend beyond its workforce to its users, Luckie writes. “There is a prevailing theory among many black users that their content is more likely to be taken down on the platform than any other group,” he writes. He also claims the company doesn’t include black people in industry events or promote them on Instagram’s influential Explore tab.

The company should take these issues more seriously, Luckie said, noting that black people in the U.S. are more avid users of Facebook and Instagram relative to white people.