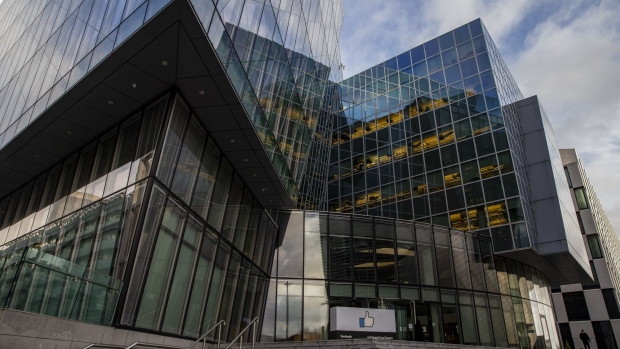 The European headquarters building of Facebook Inc. stands in Dublin, Ireland, on Monday, Jan. 6, 2020. Ireland issued a record number of passports in 2019 as applications from its citizens in the U.K. surged amid Brexit uncertainty. Photographer: Hollie Adams/Bloomberg , Bloomberg

(Bloomberg) -- Facebook Inc. said it will create 10,000 new high-skilled positions in Europe within the next five years as part of the social media giant’s push to develop a metaverse -- but the U.K. will miss out.

Target markets for the hiring include the Republic of Ireland, which unlike Northern Ireland remains part of the European Union, as well as Germany, France, Italy, Spain, Poland, and the Netherlands. A spokesperson for Facebook confirmed to Bloomberg the U.K. wasn’t being included.

In July, Facebook Chief Executive Officer Mark Zuckerberg began aggressively pushing the metaverse as a vision for the future of Facebook and the entire internet, where consumers wouldn’t just log onto the company’s platforms but live, work and play inside its digital world.

Read more: What the Metaverse Is, Who’s In It and Why It Matters: QuickTake

Facebook executives said in a blog post that the initiative is a vote of confidence in Europe’s tech sector, and that they want to see the completion of a digital single market and stability on international data flows.

“We look forward to working with governments across the EU to find the right people and the right markets to take this forward, as part of an upcoming recruitment drive across the region,” they said in the statement.