Watch out Wall Street, Facebook Inc. is coming for your engineers.

The Menlo Park, California-based social media giant plans to double its headcount in New York City, aiming to hire more than 3,000 people over the next three to five years, according to a company spokesman. About half of its existing staff in the city are engineers, or some 1,600, and poaching such workers from the finance sector is “quite common” at Facebook, he said.

The expansion could set up Facebook for a clash with some of the biggest firms in finance, like Goldman Sachs Group Inc., which is looking to recruit more than 100 coders for tech-related roles over the next few months in its biggest hiring spree in years. Goldman has said it plans to raid rivals in technology and finance.

Facebook’s plans further boost the Big Apple’s profile as a leading technology hub. The city has been actively supporting the sector in recent years since it can no longer count on Wall Street as its business engine after it was hobbled in the financial crisis. Meanwhile West Coast tech giants have been bulking up in New York, snapping up real estate and adding thousands of employees. Alphabet Inc.’s Google has more than 8,000 people mostly in Manhattan and is planning to double that over the next 10 years. And, despite nixing New York for its proposed second headquarters, Amazon.com Inc. still employs around 5,000 workers in the city -- and is actively hiring.

While the tech titans expand their footprint, the city’s big banks are spending more than ever on technology. Bank of America Corp. has said it plows roughly US$10 billion a year into technology, including US$3 billion dedicated to new initiatives. JPMorgan Chase & Co. spends about US$11 billion a year for a force of 50,000 technologists. Citigroup Inc. says technology takes up 20 percent of the firm’s expenses -- or about US$8 billion -- a year.

“The battle for engineering talent in NYC in 2019 is the fiercest I’ve seen it,” said Jovena Whatmoor, chief executive officer of Clutch Talent, an NYC recruitment firm that specializes in recruiting software engineers. “Engineers are becoming overwhelmed by the choices of which interview requests to accept.”

In the last three years, the share of job postings for technology roles in the New York metro area has increased by almost 10 per cent, according to data compiled by hiring website Indeed.com. The city is fertile ground for engineers. New tech courses and research institutes are being set up at the City University of New York, New York University and Columbia University. Meanwhile, the new Cornell Tech graduate school on Roosevelt Island is churning out eligible employees -- it now has more than 500 alumni, with 60 per cent of graduates choosing to stay in the city. 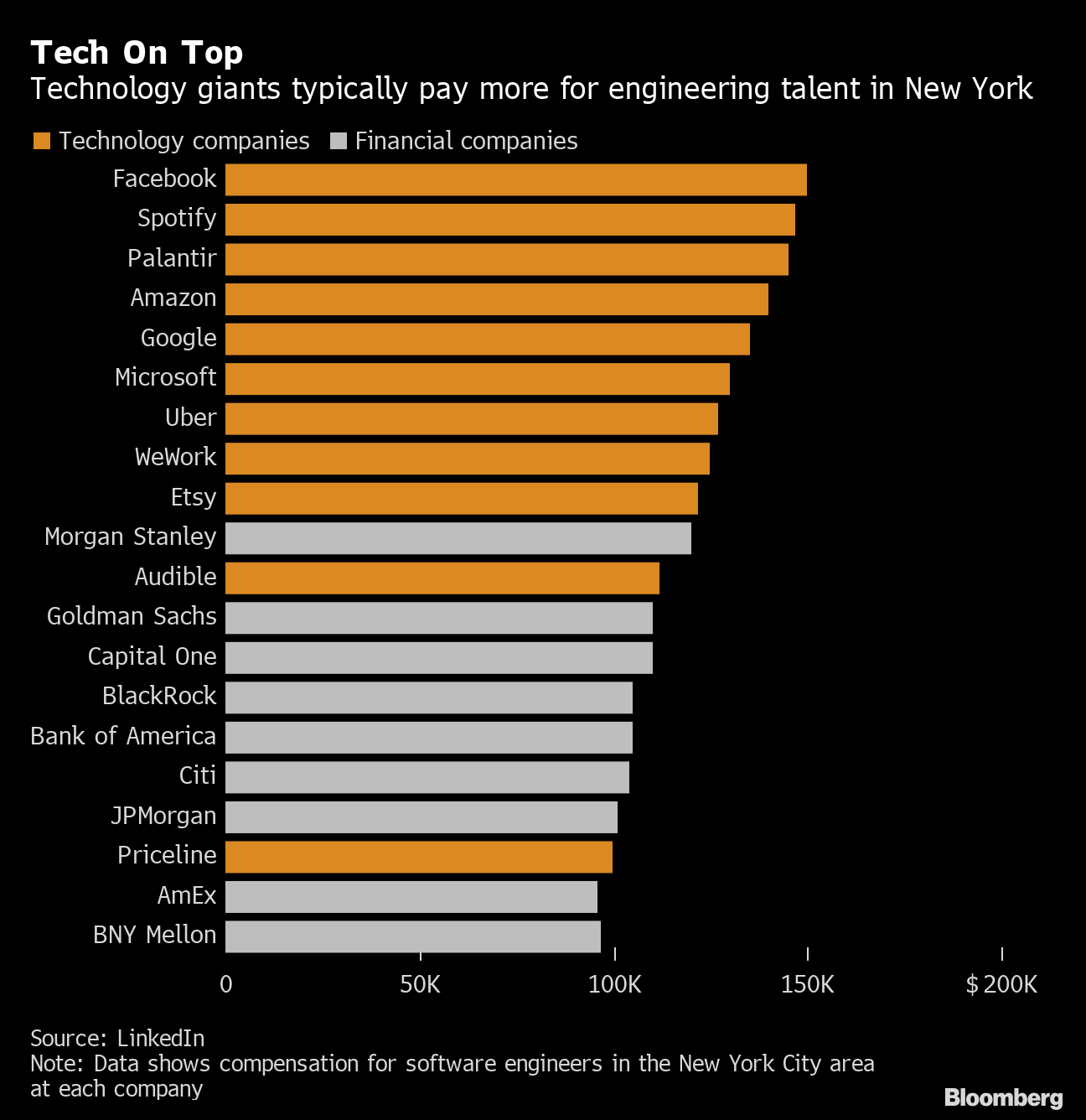 One advantage that tech companies can wield in a competitive and expensive city like New York is pay. Facebook offers a salary of about US$150,000 on average for software engineers, while a bank like JPMorgan typically offers US$100,000 in New York, according to data compiled by LinkedIn. Whatmoor said her firm has seen engineering candidates receive offers as high as US$200,000 from startups, a level she hadn’t seen even as recently as a year ago.

“There can be no doubt in the long run that this is good for every tech employer in New York,” said Julie Samuels, executive director of the nonprofit network Tech:NYC.

By hiring more engineers, Facebook is “feeding an ecosystem” in New York, which is growing every year, Samuels said. It’s getting harder for financial institutions to hire tech talent because of the increasing demand, she added. "We are incredibly bullish on the technical talent you are going to see coming out of New York. At the end of the day, the decision to go into finance or big tech comes down to what they can pay.”

In order to recruit and retain top engineering talent banks often try to take on the trappings of the tech companies, with perks such as ping pong tables in offices and trendy snacks, without really trying to change their culture, said Rob Dicks, a principal at consulting firm Deloitte who focuses on compensation and staffing at financial services firms.

“What pops out to me is: you roll the ping pong table in but then it’s considered completely verboten to go play ping pong,” Dicks said. “The tech firms have done a much better job moving west coast to east coast than the banks have done in terms of changing the inherent culture.”

Wall Street banks and finance firms are notorious for impeccable suits and long hours but at least traditionally had generous pay packages to match. Today’s recruits have other priorities. In a blog on Facebook’s website called Moving from Finance to Facebook, engineers who have made the leap outlined their reasoning -- yes the perks, including a more flexible schedule, but also a social mission that typically goes hand-in-hand with working in tech.

Nadia Alshahwan spent four years as lead architect focused on data design and quality standards at JPMorgan before joining Facebook. “My technical skills transferred over easily,” she wrote on the blog. “The big difference is now I’m solving bigger challenges, with even greater impact.”