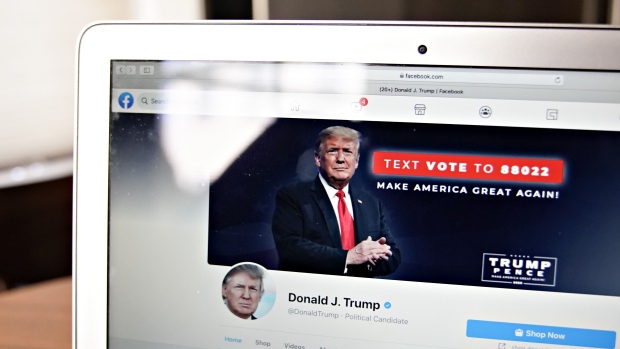 The Facebook account for U.S. President Donald Trump on a laptop computer arranged in Arlington, Virginia, U.S., on Thursday, Jan. 7, 2021. Facebook Inc. Chief Executive OfficerMark Zuckerbergsaid that the current block on Trump's Facebook and Instagram accounts will be extended indefinitely and for at least the next two weeks. Photographer: Andrew Harrer/Bloomberg , Bloomberg

(Bloomberg) -- Facebook Inc.’s independent content oversight board plans to announce on Wednesday whether it will reinstate former President Donald Trump’s account after he was banned from the social-media platform in the aftermath of the Jan. 6 insurrection at the U.S. Capitol.

The Facebook Oversight Board  said in a tweet on Monday that it will announce its binding decision on Trump’s access to the platform on its website at about 9 a.m. New York time on Wednesday.

The company suspended Trump from posting to his 35 million followers after he encouraged supporters to march on the U.S. Capitol on Jan. 6 in what became a deadly attempt to stop the counting of Electoral College votes for President Joe Biden. The ban was originally temporary but was changed to an indefinite suspension the following day.

Facebook asked the oversight board, an independent group of academics, lawyers and others, to review its decision to suspend Trump and determine whether it should be overturned. The company had previously committed to acting at the board’s recommendation.

“We believe the risks of allowing the president to continue to use our service during this period are simply too great,” Facebook Chief Executive Officer Mark Zuckerberg said at the time.

Trump was also banned from Twitter Inc in January, a move that the company has said is permanent. He was also blocked on Snapchat, YouTube Inc and Twitch Interactive Inc, among other networks.

Losing access to social media was a political blow for Trump. The ban from Twitter, which he used for everything from insulting rivals to major policy announcements and where he had 89 million followers, meant he was largely silent in the weeks after he left office on Jan. 20.

Trump has been issuing press releases -- sometimes in the style of his tweets, using all capital letters and commenting on things like the low ratings of the Academy Awards broadcast -- and calling in to conservative television programs, but that strategy lacks the reach and immediacy of his social-media postings.