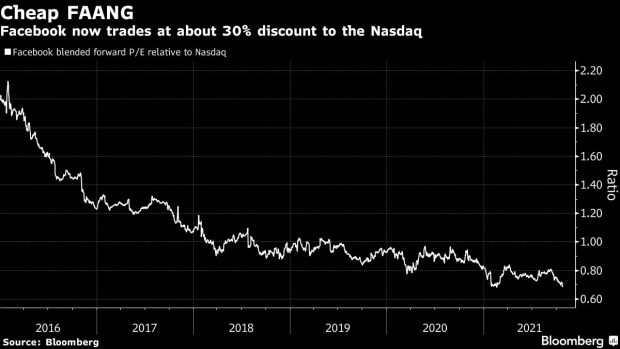 The social media giant gained 2.4% as of 7:01 a.m. in New York, as several analysts cut their price targets but maintained a positive view on the stock. Facebook touted its metaverse investments even as the effects of Apple Inc.’s stricter data collection rules prompted a weaker-than-expected guidance for revenue in the current quarter.

Slower revenue growth is just one of many challenges for Chief Executive Officer Mark Zuckerberg, as claims of an inadequate response to hate speech, misinformation and violent content swirl around the company.

Facebook has surrendered its $1 trillion valuation tag, after losing more than $150 billion in market value in less than two months. The sharpest selloff came last week amid industry-wide concern about the impact of Apple’s curbs on advertising spending, following a warning by Snap Inc. Analysts said the concerns now appear to be largely priced in.

Many expect the shares to be supported by a $50 billion addition to Facebook’s stock-repurchase program and spending on virtual and augmented reality tools. Guggenheim’s Morris said a plan to break out financial results for Facebook Reality Labs should increase visibility.

“Facebook initially seems to have mitigated these headwinds better than feared as a result of their long-tailed advertiser scale/diversity and greater intensity of investing in owned/operated advertising solutions,” Goldman Sachs Group Inc. analyst Eric Sheridan wrote in a note. Sheridan was among Wall Street analysts to cut their price targets, while remaining bullish on Facebook’s outlook for 2022 and beyond.

Facebook’s recent slump has cost it a place among the five most-valuable U.S. companies. It’s also made the stock the cheapest among the mega-cap U.S. technology names, trading at just 18.7 times forward earnings.

But the outlook may be for better times.

“We think reasonable yet healthy growth expectations coupled with an attractive valuation and new $50 billion share repurchase program should support sentiment as investors continue to digest the impact of ongoing privacy changes on the digital advertising landscape,” said Maria Ripps, an analyst at Canaccord Genuity Inc.