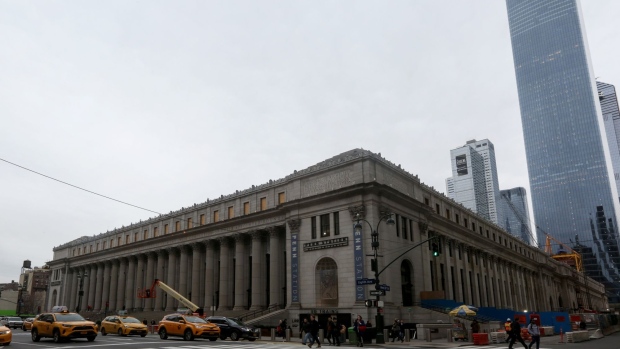 (Bloomberg) -- The future for Manhattan offices is looking up.

Big New York landlords have insisted that demand for offices would rebound after the pandemic, which curtailed deals and shuttered towers for months, sending everyone to work from home. Now, Facebook Inc.’s new lease at Vornado Realty Trust’s Farley Building, a former post office near Pennsylvania Station, is adding credence to that thesis.

Facebook is taking over the whole office portion of the property, a commitment that Vornado Chief Executive Officer Steven Roth called “a dramatic statement” by one of the world’s premiere tech companies.

“This deal reinforces New York City as a great, unique place to do business,” Roth said on a conference call with analysts. “With an unlimited highly educated workforce, New York continues to be the place to be.”

Shares of Vornado jumped 7.5% at 11:25 New York time, the biggest intraday gain since June, while those of SL Green Realty Corp., another major Manhattan landlord, rose 4.4%.

Both companies’ shares had dropped almost 50% this year amid skepticism around the future of New York’s retail and office markets. Even as the city reopens, workers have been slow to return, and tourism is at a standstill. Tech giants including Amazon.com Inc., Google and Facebook are among companies letting employees work from home until at least 2021.

Facebook’s latest lease ends Vornado’s years-long search for a tenant for the Farley Building, part of a $2 billion plan to modernize what the real estate investment trust calls the Penn District.

The deal is “proof that businesses intend to return to the office,” and provides a boost to Vornado’s broader redevelopment plan, Piper Sandler Cos. analyst Alexander Goldfarb wrote in a note to clients. Citigroup Inc.’s Emmanuel Korchman said the lease helps “illustrate the continued desire for tech companies to locate and expand in NYC.”

Concerns about the city’s street retail and office fundamentals remain, Vikram Malhotra at Morgan Stanley wrote. Leasing plummeted to a record-low in the second quarter, falling 71% from the same period last year, according to Savills Research.

Many of the completed agreements were already being negotiated before the March lockdown, and were nudged across the finish line with last-minute incentives, some at a 10% to 20% discount to pre-pandemic term sheets, Savills said.

Vornado’s Facebook deal, long awaited by New York’s real estate industry, is “within the parameters of our original underwriting,” Roth said on the call. “To be honest, there was a little bit of give and take in the end, as a result of the environment.”