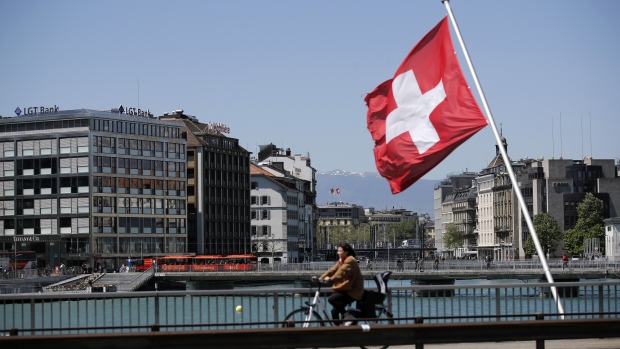 (Bloomberg) -- Policy makers around the globe have been cool to the idea of Facebook Inc.’s planned Libra cryptocurrency. In Switzerland? They liked it so much, Facebook decided to set up shop there.

Geneva is “excited” to work with Facebook, the canton’s economic development chief Pierre Maudet said last week after it emerged Facebook had picked the Swiss city as the home of the Libra Association, a not-for-profit organization that will govern the payment network and manage a financial reserve for the cryptocurrency. The Swiss State Secretariat for International Finance said it’s a “positive sign that Switzerland can play a role in an ambitious international project.”

The move reflects the country’s light-touch approach to regulation and an enthusiasm for digital currency not shared by officials elsewhere who worry about its potential as a haunt for criminals. Swiss politicians have gushed about the potential of “Crypto Valley” in the low-tax Swiss city of Zug, and then-Finance Minister Johann Schneider-Ammann last year even talked about Crypto Valley morphing into a “Crypto Nation Switzerland.”

“Switzerland’s regulation is much lighter than in other European countries when it comes to cryptocurrencies,” said Sven Korschinowski, a partner at KPMG. “It made sense for Libra to come to Switzerland.”

So far, though, there’s little to see. Unlike, Berlin and London, Geneva has no tech district to speak of. For now, Libra is renting space at a shared office on an island in the Rhone River on the site of a former branch of Coutts bank. Other tenants include PayPal Holdings Inc. and Crypto Finance AG.

French Finance Minister Bruno Le Maire said “it is out of question’’ that Libra “become a sovereign currency,” and he called on colleagues to scrutinize Facebook’s plans. Maxine Waters, chair of the U.S. House Financial Services Committee urged a halt in developing the token until Congress can examine it. Even Facebook’s co-founder has said he’s against it.

A series of fraudulent initial coin offerings in the U.S. has worried Washington regulators that cryptocurrencies risk becoming a magnet for crime - and Switzerland is not immune. The Wannacry hackers in 2017 tapped a Swiss bitcoin exchange to launder the proceeds of their extortion scheme.

Later that year, Swiss financial regulator Finma warned the public about digital coin scams, shut down one operator and opened investigations into others. At the same time, it’s given at least one company, Crypto Finance, the same license as professional fund managers, meaning it can manage and distribute domestic and foreign funds and provide advice to investors.

Finma said last week it’s in contact with Facebook to determine if the project would need approval. More broadly, however, Finma’s approach to regulating crypto has gone down well with Crypto Valley executives.

“Finma deserves a lot of credit for being very pragmatic and patient in the way they have been approaching the subject,” said John Hucker, the president of the Swiss Finance & Technology Association.

It was Switzerland’s appeal as a place to connect to civil society and international organizations that clinched it for Facebook, said Dante Disparte, a spokesman for Libra.

“Our goal is to manage Libra, the technology and the digital currency very much like a public good, so where better than Switzerland to make this kind of global organization and project,” he said in an interview.

Cryptocurrencies also offer a new area to compete in now that Swiss private banking has been so undermined by foreign prosecutors looking to root out tax evaders stashing their fortunes in Switzerland, says Andre Brunner, a cryptocurrency expert at Capco in Frankfurt.

“With bank secrecy under threat, crypto is a door to a new world and you have the lawyers and the currency experts here, the ecosystems,” said Brunner.

Ultimately, it may come down to Switzerland’s history of pragmatism, he says.

“As long as it’s legally sound and well set up, I think the Swiss government’s attitude is more ‘come and be our guest’ rather than ‘we don’t want to have anything to do with this’ - and risk missing out.”

To contact the authors of this story: Hugo Miller in Geneva at hugomiller@bloomberg.netLeonard Kehnscherper in Zurich at lkehnscherpe@bloomberg.net

To contact the editor responsible for this story: Jan Dahinten at jdahinten@bloomberg.net