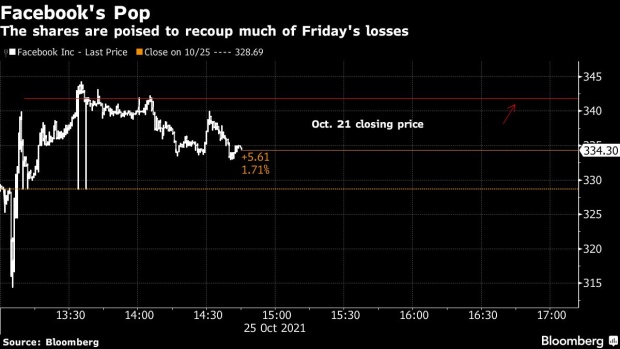 Facebook rose nearly 5% in postmarket trading on Monday after reporting mixed third-quarter financial results that included a $50 billion boost to its share repurchase authorization and a revenue forecast that trailed the analyst estimate. The stock later pared some of the gains, but is still on track to recoup much of the the losses suffered in Friday’s 5.1% selloff.

Facebook and other companies that rely on digital ads for revenue, such as Twitter Inc., tumbled on Friday after Snapchat’s parent said customers were cutting back on ad budgets in part due to changes in Apple Inc.’s data collecting policies. Facebook shares rebounded on Monday to close 1.3% higher despite more reports about its internal decision making on platform content and waning popularity with younger users.

So far, Wall Street has continued to endorse Facebook’s shares, which are down 14% from a September record, based on Monday’s closing price. The Menlo Park, California-based company has 49 buy ratings, nine holds and three sells, according to data compiled by Bloomberg.