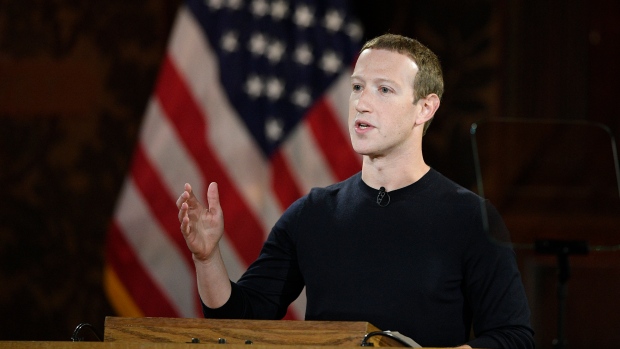 Mark Zuckerberg may be the most visible man in Washington these days — an impressive feat considering his competition.

The Facebook Inc. chief executive officer has been everywhere. After a day of meetings on the Hill last week, he gave a public speech at Georgetown University on free expression. The next day he appeared on Fox News, and a few days later on NBC Nightly News with Lester Holt. Monday morning, Zuckerberg hosted a press call with journalists about Facebook’s election efforts ahead of the 2020 U.S. elections.

It’s been Zuckerberg overload, but none of those appearances promise to be as interesting or unscripted as what’s still to come: On Wednesday, Zuckerberg will take questions at a public hearing before the House Financial Services Committee on Capitol Hill. The group of 60 politicians, led by one of Facebook’s most vocal critics in Representative Maxine Waters, a Democrat from California, will ask about Facebook’s plans for a new global cryptocurrency — and pretty much anything else that comes to mind over what promises to be a several-hour affair.

“There’s going to be a wide-ranging number of issues. This is not only about Libra,” David Marcus, the Facebook executive leading the company’s cryptocurrency push, told reporters last week at a dinner in Washington. Marcus appeared before this very committee in July to answer questions about Libra for hours. “It’s hard to predict how these things will go,” he added.

Zuckerberg, once a rare visitor to the nation’s capital, will make his third public appearance there over the past month when he arrives at the House hearing this week. The 35-year-old CEO met with a number of politicians in late September, including members of both parties, and also held a closed-door meeting with President Donald Trump in the Oval Office. Last week, he met with Waters for a pre-hearing meeting ahead of his speech at Georgetown.

Wednesday’s House hearing is titled: “An Examination of Facebook and Its Impact on the Financial Services and Housing Sectors.” While there is no clear agenda, it’s expected that many of the questions will be about Libra, the company’s newly proposed cryptocurrency. And, given the billing, there will also probably be questions about Facebook’s targeted ad business. Facebook has been accused of letting advertisers discriminate with their ads on the network. Politicians, though, are free to ask whatever they want.

“I’m sure a lot of people will dig in on privacy,” said Warren Davidson, a Republican from Ohio who is on the committee. “You’ve got a huge wealth of data that they’ve harvested from their users’ activities. Do you now mingle that same database with financial transactions?”

Representative Lance Gooden, a Republican from Texas, said he is optimistic that Libra can succeed. His biggest issue is that the Libra Association is headquartered in Geneva instead of in the U.S. Gooden joined Waters on a trip to Switzerland in August to discuss Libra with local regulators. “We left thinking, ‘what a shame that something that could perhaps be a great thing for the future of the world economy is not going to be based in the U.S.,’” he said.

Usually Zuckerberg sends other Facebook employees to these kinds of political hearings — he’s invited to many of them all over the globe — and many on his staff have appeared since Facebook’s role in the 2016 election first stirred up questions about how the service is used to disseminate news and election ads.

Zuckerberg’s appearance will likely generate more interest and headlines than usual, but it’s possible there won’t be much more to learn. The company already announced a handful of election-related updates on Monday, including changes to how it labels misinformation and Pages for some state-run media organizations. Marcus answered questions for hours about Facebook’s cryptocurrency plans before this same committee in July, and has been on a media blitz himself in recent weeks as the group overseeing the new currency was formed just last week.

The timing of the hearing may mean the public hears even less from Zuckerberg than politicians had hoped for. While Facebook and Marcus have been the clear leaders on the Libra project, the company is now just one of 21 members overseeing the currency and its governance, all with equal voting control.

“He can’t be the face of [Libra]. That’s the interesting thing,” Marcus said. “Last week, because we were still leading this thing, he could have answered on behalf of the Libra Association. But he cannot engage or commit to anything on behalf of the Libra Association because he doesn’t have the power to do that.”Davidson says he’d be surprised if Zuckerberg can answer many questions on behalf of Libra, but does expect him to speak about Calibra, the division within Facebook that will handle the company’s new digital wallet product.

The hearing is set to begin Wednesday at 10 a.m. ET. Each of the committee’s 60 listed members will be allowed five minutes to speak or ask questions on top of opening statements and breaks. Assuming most of them show up to take advantage of their allotted time, that means the hearing could last well over five hours.

“My hope is that Mr. Zuckerberg will walk away feeling pleasantly surprised that Congress stands ready to work with him,” Gooden said.