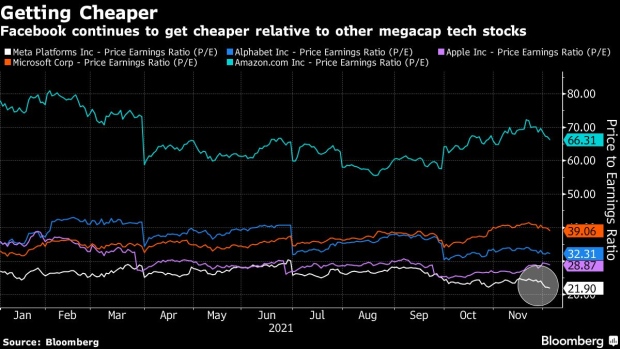 (Bloomberg) -- Bargain hunters are no longer pouncing on skids in the shares of Facebook parent Meta Platforms Inc. the way they once did.

The social media giant posted its worst week since June 2020 as investors fled riskier assets following a hawkish tilt by the Federal Reserve. Meta’s decline of 7.9% over the five sessions far outpaced those of megacap technology peers, but it wasn’t met with the surge of buying from retail investors that’s helped lift the stock out of previous selloffs.

Net purchases of Meta by retail buyers barely budged this week, hovering around $40 million, according to data from Vanda Research. Five weeks ago, a similar drop in the stock price prompted a weekly inflow of more than $150 million and triggered a rebound in the shares.

Now, the cheapest of the megacap stocks keeps getting cheaper. Meta is less expensive than about 40% of the stocks in the Russell 1000 Value Index, based on price to trailing profits, according to data compiled by Bloomberg.

The stock is trading at 22 times earnings, down from 28 in September when Meta shares were at a record high. Of course, that was before a whistleblower released a trove of internal data that fueled another round of intense scrutiny and more angst about regulatory risks.

The weakness in Meta shares has been a surprise to Phil Blancato, chief executive officer of Ladenburg Thalmann Asset Management. While he expects many of tech’s high flyers to remain under pressure as the Fed reins in stimulus measures, he said Meta is starting to look attractive.

“There’s some political pressure and breakup talk, but these seem to be non-economic related,” he said. “From a valuation standpoint and where they’re trading versus their earnings power, it looks like a good opportunity.”

The Menlo Park, California-based company’s sales are projected to expand 19% in 2022, faster than Alphabet Inc., Apple Inc., Amazon.com Inc. and Microsoft Corp., according to the average of analyst estimates compiled by Bloomberg.

This may explain why Wall Street remains bullish on the stock. With 52 of the 62 analysts tracked by Bloomberg that cover the company recommending it, Meta has a higher percentage of buy ratings than Apple, which has outperformed it since the start of the year. Based on the average price target, Meta has the biggest return potential among its megacap peers at 31%, according to data compiled by Bloomberg.