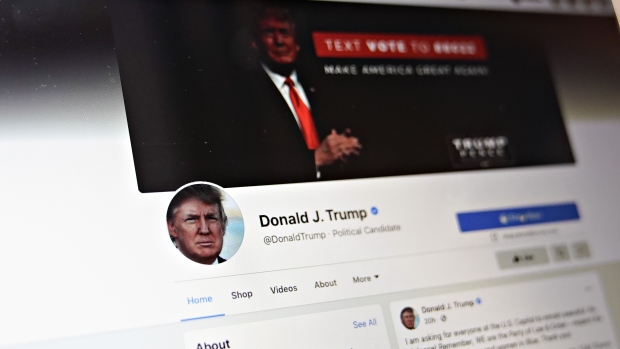 The Facebook account for U.S. President Donald Trump on a laptop computer arranged in Arlington, Virginia, U.S., on Thursday, Jan. 7, 2021. Facebook Inc. Chief Executive OfficerMark Zuckerbergsaid that the current block on Trump's Facebook and Instagram accounts will be extended indefinitely and for at least the next two weeks. , Bloomberg

The social media giant took the unprecedented step Thursday of extending a block on Trump’s Facebook and Instagram accounts that it had put in place a day earlier, following a similar move by Twitter Inc., after he praised an angry mob of supporters who violently stormed the U.S. Capitol as Congress met to certify Joe Biden’s election as the next president. “We believe the risks of allowing the President to continue to use our service during this period are simply too great,” Chief Executive Officer Mark Zuckerberg said in a Facebook post. The block will last at least until Jan. 20, when Biden is sworn in.

After years of fitful action on questionable content, both Facebook and Twitter have struggled in recent months to take a harder stance over Trump’s often inflammatory posts. It started in May, when Twitter took the unheralded step of obscuring one of the president’s posts about protests over George Floyd’s death in Minneapolis — which included the comment “when the looting starts, the shooting starts” — saying it glorified violence. It also added fact-check notices to Trump tweets about mail-in voting. At the time, Facebook defended leaving up some controversial posts, with Zuckerberg famously saying his company should not “be the arbiter of truth of everything that people say online.” Going into the election, they both were more aggressive in adding fact-checking labels on misinformation promulgated by Trump and others. But it looks like it wasn’t enough.

The truth is, both Facebook and Twitter have continued to let conspiracy theories and misinformation run rampant on their platforms, poisoning the minds of the general public and radicalizing domestic extremists. The result was this historically tragic event in our nation’s capital, which left four dead. Ironically, the video that was taken down on Wednesday is hardly the most egregious one Trump has posted. The president did not explicitly incite violence, instead he asked his supporters to “go home” and be peaceful, though he reiterated his false claims of election fraud. But it seems the day’s violence compelled Facebook and Twitter to alter their prior deference for letting Trump’s posts stay up as political speech and in the name of newsworthiness. The tumult was a turning point for others as well: Amazon.com Inc. said it will ban Trump’s channel from its Twitch streaming network at least through Jan. 20, while e-commerce company Shopify Inc. said Thursday that it removed stores affiliated with Trump from its platform.

The Facebook Trump block is necessary triage at this point, even if it doesn’t fix everything and came only after the worst of the chaos in Washington was over. For years, the president has proved his inability to change his bad behavior and now doesn’t deserve any special privileges. Trump’s repeated use of careful legalistic parsing in his language, while at the same time sending clear dangerous messages to his base, should not be allowed anymore through social media. As private companies there are no freedom of speech issues at play; Facebook and Twitter have every right to take down or suspend user accounts. And that shouldn’t be the end of it. Both platforms should work even harder to remove disinformation, harassment and conspiracy theories as quickly as possible.

At least 2021 may bring positive developments on the regulatory front. After Wednesday’s events, I fully expect President-elect Biden’s administration to take a harder look at the companies’ content-moderation and amplification practices. In the meantime, Facebook and Twitter can help themselves — and the rest of us — by taking their own hard look in the mirror. They can’t eliminate all the toxic talk on the internet, but they can do a better job of making sure it’s not blaring from their two big megaphones. Even when it’s the U.S. president.

(The fourth paragraph was updated to add Amazon’s ban of Trump’s channel on its Twitch streaming service.)