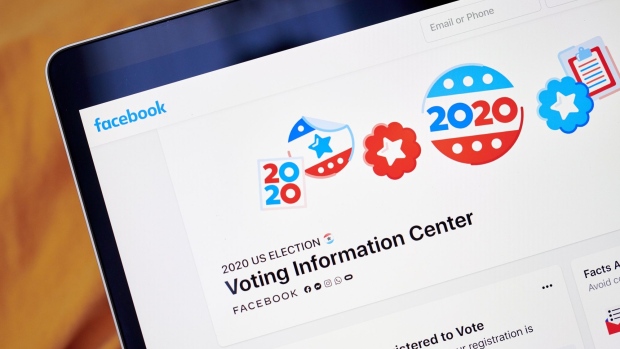 The 2020 Election Facebook page is displayed on a laptop computer in an arranged photograph taken in the Brooklyn borough of New York, U.S., on Monday, Oct. 12, 2020. Facebook Inc. is tightening its rules on content concerning the U.S. presidential election next month, including instituting a temporary ban on political ads when voting ends, as it braces for a contentious night that may not end with a definitive winner. Photographer: Gabby Jones/Bloomberg , Bloomberg

Facebook Inc. took down two networks it says were trying to influence behavior around the U.S. election with fake accounts.

The largest effort announced on Tuesday involved two Facebook pages and 22 Instagram accounts, spreading memes pre-election, some of which were borrowed from past efforts by Russia’s Internet Research Agency. The network began began creating accounts in April and was operated by individuals -- some wittingly and some unwittingly -- from Mexico and Venezuela. The operators took steps to hide their identity, with some of them claiming to work for a Polish firm that doesn’t appear to exist, according to Facebook.

They used fake accounts to create fictitious personas and post content in Spanish and English about racial injustice, feminism, gender relations and other issues. About 54,500 people followed at least one of the accounts, half of them were in the U.S. Facebook believes the network was run out of Mexico, but is still investigating.

The other network focused on the U.S. and Israel. Facebook removed 12 accounts, six pages and 11 Instagram accounts. While the operators of the network attempted to conceal their identity, Facebook’s investigation connected it to people, who aren’t named, associated with the Iranian government.

Facebook removed a third network that didn’t involve U.S. politics. That network originated in Myanmar and focused on domestic audiences, according to Facebook.

The networks were caught early in their operation and before they could build much of an audience, said Nathaniel Gleicher, head of security policy at Facebook. Because a top goal of these campaigns is to disrupt faith in the truth or the democratic process, Gleicher said if people make a big deal out of them and overstate their influence “the only people it really helps is the actors behind them.”

A shift in behavior by those aiming to influence elections -- like trying to redirect people to alternative websites or trying to convince journalists to spread their messages instead of spreading them in a Facebook group -- shows that Facebook has become less hospitable to bad actors, he said.